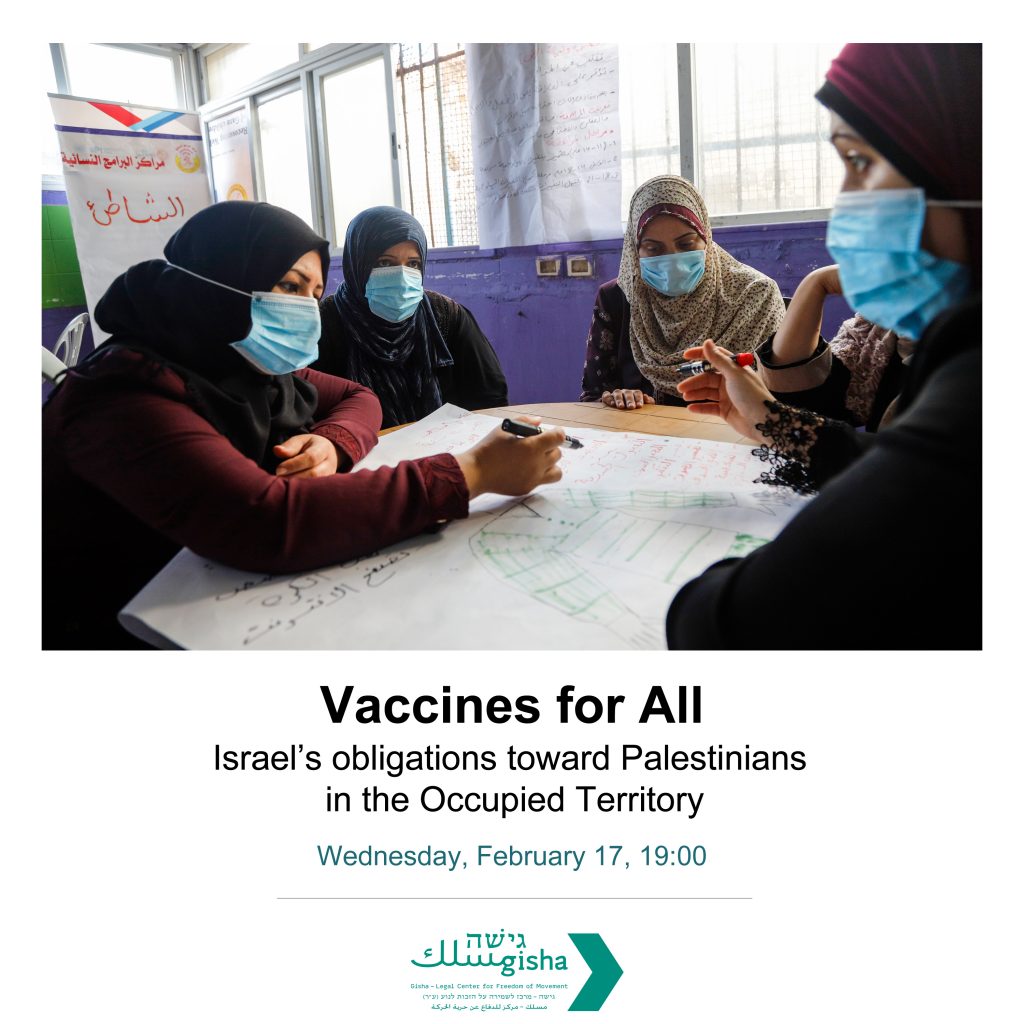 March 3, 2021. A year after COVID-19 was declared a pandemic, more than half the people living in Israel have received both doses of the vaccine. Meanwhile, only a tiny number of vaccines have been made available to Palestinians in the West Bank and Gaza Strip. While Israelis look forward with optimism toward an end to the health crisis, no plan has been put forth for supplying the vaccine to the vast majority of Palestinians living under occupation, including Gaza’s two million residents.

Gisha recently hosted a session of the Gaza Policy Forum in Hebrew, which focused on Israel’s obligation to supply and ensure access to vaccines for Palestinians in the West Bank and Gaza. The panel, entitled “Vaccines for All,” was moderated by Gisha Public Advocacy Coordinator Noa Galili. Panelists included Member of Knesset Aida Touma-Suleiman, Director of the Occupied Territories Department at Physicians for Human Rights Israel, Ghada Majadle, Gisha lawyer Muna Haddad, and Executive Director of Rabbis for Human Rights, Avi Dabush.

At the forum, Ghada Majadle presented statistics on the number of COVID cases in the West Bank and Gaza. The small numbers of test kits available to the Palestinian, about a tenth of the number available to Israelis, reflects a disturbing reality: “COVID patients in the occupied Palestinian territory (oPt) are 50% more likely to die of the disease than [COVID patients] in Israel.”  She noted that the Palestinian healthcare system suffered from underdevelopment and a shortage of medicines and medical expertise even before the pandemic, as a result of Israel’s control of countless aspects of life in the oPt – including control over the transfer of taxes and customs duties it collects on behalf of the Palestinian Authority.

On the day of the forum, February 17, Israel had allowed, for the first time, the transfer of 2,000 vaccine doses donated by Russia to the Palestinian Authority from the West Bank to Gaza, after having delayed the shipment for two days. According to Majadle, Israel’s control over the transfer of vaccines brings into sharp relief the dependence of the Palestinian governments on decisions made by Israel: “It creates an opening for political bartering and for delaying or preventing the transfer of vaccines.”

Majadle also noted that according to the Israel Association of Public Health Physicians and some senior experts at the Ministry of Health, the pandemic cannot be overcome in the region without full or near-full vaccination of Palestinians in Gaza and the West Bank. Majadle said, “They consider the entire area between the [Jordan] River and the [Meditteranean] Sea as a single epidemiological unit.” Majadle concluded by stressing that “the vaccine issue cannot be seen as anything other than one of discrimination between two populations living in the same area. When people aged 60 and over in Israel were receiving the vaccine, so should have people aged 60 and over in the Palestinian territory.”

Adv. Muna Haddad clarified Israel’s specific legal obligations towards Palestinians in the West Bank and Gaza Strip: “Israel is considered an occupying power under international law and accordingly, it has obligations, pursuant both to international humanitarian law and international human rights law.” Israel’s military rule in the West Bank and its control over Palestinian border crossings allow it to dictate who and what may enter and exit the West Bank and Gaza, and it deliberately prevents access to medical equipment and medical training, among other things. “The state takes an active role in suppressing and undermining the healthcare system and the economy and it harms the most basic infrastructure […] and the basic rights of people living there – the right to freedom of movement, the right to health, and even the right to life.”

Haddad clarified that Israel’s conduct violates various provisions of international law: “According to Article 43 of the Hague Regulations, Israel has a duty to ensure the safety and well-being of all Palestinian residents in the occupied territory, and this pertains to a variety of health and welfare-related issues. The Geneva Convention applies to Israel, imposing an obligation on the occupying power to ensure, using all means at its disposal, the supply of food and medicine to the civilian population, particularly when there is a shortage and the resources in the occupied territory are insufficient.”

MK Touma-Suleiman criticized the Knesset’s performance in supervising decisions made by the Israeli government, which has used the COVID pandemic for political gain, emphasizing that “what the government is doing is a war crime.”

Touma-Suleiman spoke about the meeting called earlier that week by MK Zvi Hauser in the Foreign Affairs and Defense Subcommittee on the supply of vaccines to Palestinians. She criticized MK Hauser’s suggestion that vaccine supply be used as a political bargaining chip for the release of Israeli citizens and soldiers’ bodies being held captive in Gaza, as well as the idea of conditioning the entry of vaccines into Gaza on Israeli control over who receives them.

Avi Dabush spoke about a petition by Rabbis for Human Rights, signed by more than 200 rabbis from Israel and abroad, calling on Israel to supply vaccines to the Palestinians: “Unfortunately, there is a link between religion generally and Judaism specifically, and nationalism, messianism and Jewish supremacy (…) However, Jewish thought and religious pluralism place human dignity center stage, regardless of a person’s identity – Jewish, Israeli, Zionist, or any other form of supremacy – on the contrary.” Dabush said that many in the Israeli public sympathize with these values, including people in Israeli communities near the Gaza Strip, where he lives. “They too want to join the struggle against cynical politicians who are trying to make political gains at the expense of two million Gazans.”

Key recommendations made in the forum:

To watch the forum (with subtitles in English), click here