Since Israel withdrew from the Gaza Strip in 2005, its control over every aspect of its residents’ lives has grown ever deeper. In addition to the blockade, imposed on land, at sea and in the air, and on top of the destruction left behind after every round of fighting and the harm caused by electronic surveillance and spying, Israel controls countless aspects of the lives of Gaza residents: Their economic situation, their health, and their social connections.

Through a regime of restrictions and permits, the bureaucracy and daily practices of the occupation have created a new mode of family communication, redefining family ties and how deep they run. Family occasions like weddings or mourning rituals are disjointed and incomplete. The presence of family in a person’s life is felt most strongly and takes on a special meaning on special occasions, be they sad or joyous. Weddings are usually the height of celebration, while mourning rituals are often filled with grief and sorrow. We might take these life rituals for granted, but in Gaza, neither life nor death, joy nor mourning, can escape the grip of the occupier and its regime of control.

Thousands of families in Gaza have relatives living in the West Bank or within the Green Line, but over the past two decades, the occupation has imposed unyielding obstacles and restrictions on receiving permits to visit family in the Strip or outside of it. Applications may only be submitted for the purpose of visiting a first-degree relative (a parent, sibling, child, or spouse), provided this relative has an extremely serious medical condition, is getting married, or has died. In other words, Israel does not enable ordinary or routine family visits.

The red tape and bureaucracy involved in applying for permits to enter or exit Gaza is an obstacle course, which reflects how Israel views Gaza residents as “cases” or “applications” passed from one desk to the next. The process begins with submitting documents through the Palestinian Authority, which transfers them to the Israeli authorities. Only then does the consideration of the permit applications actually begin, a process that typically takes several weeks. Applications to visit a sick relative sometimes turn into applications to attend their funeral. Death does not always wait.

A quick review of the cases handled by Gisha reveals that some of the answers to applications to attend the funeral of a first-degree relative only arrived the day after the funeral. Funerals in the West Bank are often fraught with uncertainty and anticipation. Many try to delay the funeral until their relative from Gaza is able to arrive and part with their loved one, but families cannot know if the applications will even be approved, adding to the family’s grief and pain. Even in death, Palestinians are subject to Israel’s control and to the timeframes it dictates. 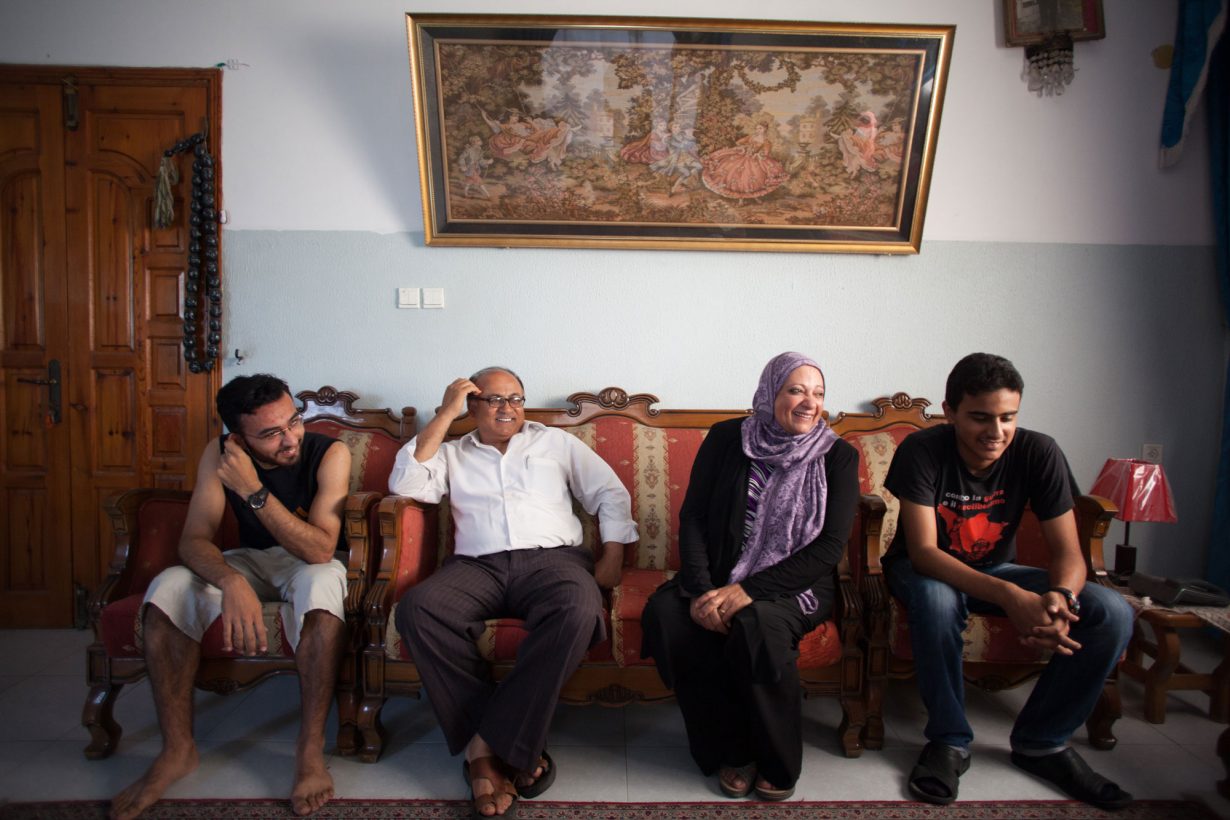 Nasser and Salwa Yaghi and two of their sons at home in Gaza. Photo from Gisha’s Distant | Relatives project, by Eman Mohammed

“I married a man from Gaza in 1999 and moved there to live with him,” says Suhad, who was born in the West Bank. “I have only visited my family in Nablus five times since then. My mother passed away eight years ago. I received the permit to attend her funeral the day after it took place. I last visited Nablus four years ago, when my father passed away. Ever since then, I’ve been unable to visit and see my brothers and sisters – they are all healthy, and they’ve all been married for years. How am I ever going to get a permit to visit them?”

The purpose of Israel’s “separation policy” is to separate the West Bank and Gaza and create a divide between them, especially when it comes to social connections and family relationships. So for example, if a person meets all the conditions stipulated in Israel’s criteria for travel (i.e., they wish to visit a first-degree relative in the West Bank in one of the circumstances specified above), but the person happens to be a young, single man, or a man whose spouse lives in the West Bank, Israel would suspect that the person might not return to Gaza. That person’s permit application would therefore be examined according to different considerations, and in most cases, denied. In other words, Israel’s obsession and paranoia over the possibility that a Gaza resident would relocate permanently to the West Bank to be with his or her family trumps any other consideration. The road to obtaining a permit is riddled with exhausting bureaucratic demands – from detailed reports about the medical status of the applicant’s ailing relative, to “security interviews” with various intelligence agencies, and ultimately, to the courtroom and in-camera proceedings. If there is no “security block,” the permit applicant may still find themselves having to explain why a sick man in his nineties needs care and assistance, or why a father needs to be by his daughter’s side in the operating room.

If the application is approved, the permit is only valid for 60 hours, ten or more of which are wasted waiting at checkpoints, being searched, and traveling.

Funerals are not the only events at the mercy of Israel’s mechanisms of control. Weddings and matrimonial ceremonies are too. Neither the wedding date nor its related festivities are private family matters, free from the permit officer’s interference and decree. According to Arab tradition, weddings last multiple days and nights. The permit officer, however, does not care, forcing families to try to plan and organize weddings around the constraints of the permit regime. “According to the permit I was granted for my sister’s wedding, I could either attend the henna ceremony or the wedding itself, but not both,” says Rana, “So I only went to the henna ceremony. I spent the day of the wedding itself at Qalandiya checkpoint, waiting for a soldier to give me a permit so that I could travel back to Gaza in time.” This is added to the constant fear and anxiety, the silent waiting for the next family reunion.

Before the horrific assault on Gaza in 2014, only children under the age of six were permitted to travel with their parents for family visits. We have seen a child turned away at Erez Crossing because he was six years and eight months old. After the war, the age for children accompanying their parents was changed to 16.

With its permit regime, Israel has created an invisible blockade with profound psychological and social effects on Palestinians’ family life, their private lives, their grief and their festivities. As long as we take for granted our ability to rejoice and mourn with our loved ones, we will never understand what the reality of life is like for Gaza’s residents, in all its pain and suffering. To understand this requires a mental exercise. Only if we temporarily set aside our most basic assumptions about the world, can we begin to grasp what it would be like if seeing our family was situation-dependent; if a dear relative died before we had a chance to say goodbye, hold them, and look in their eyes one last time; if relatives who aren’t immediate family – a nephew or a niece, for instance – were deemed too distant.

This text was published by faraamaai.org