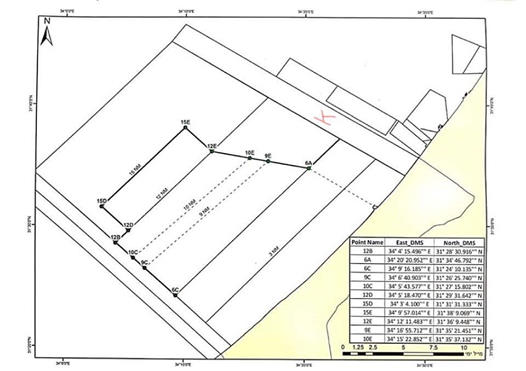 A map of the “fishing zone” enforced by Israel. Source: The Gaza Fishermen’s Association (area K marked by Gisha)

April 22, 2020. The Gaza Fishermen’s Association reports an increase in the frequency of incidents in which the Israeli navy fires at fishermen in Gaza’s territorial waters. Yesterday, April 21, two incidents of firing were recorded. In the morning hours, a fisherman was injured in his head after being shot with a rubber bullet, and a boat’s engine was damaged. In the late evening there was heavy fire towards fishing boats at sea.

According to Gaza-based Al Mezan Center for Human Rights, 67 incidents of gunfire by the Israeli navy have been recorded within Gaza’s “fishing zone” between January and March 2020, resulting in injuries to fishermen and heavy damage to boats. For years, methods used by the navy to enforce Israel’s restrictions on access to Gaza’s sea space, including the use of live fire and boat seizures, have put the lives and livelihoods of fishermen at risk.

The sardine season has only just begun, and demand for fish is expected to increase in the coming period, particularly during the month of Ramadan. According to Nizar Ayash, chairman of the Gaza Fishermen’s Association, many fishermen are interested in fishing in the area of the permitted zone off Gaza’s northern shoreline, where there are large concentrations of sardines and other types of fish. On Thursday, April 16, the Israeli military unit of the Coordination and Liaison Administration (CLA) notified the Ministry of Agriculture in Gaza that anyone approaching the “sterile area” opposite the north of the Strip (referred to as Area K, marked in the illustration below) will be at risk of being shot at and of their boat being seized. According to Ayash, fishermen are afraid to go out to sea, meaning they miss out on potential catch, especially in the north of the zone.

Zakariyya Baker, head of the Fishermen’s Union, which is part of Gaza’s Farm Labor Union, told Gisha that “in the last two weeks the Israeli military has targeted fishing vessels in order to put them out of commission. The damage is serious and we’re paying a heavy price.”

Israel’s restrictions on access to the “fishing zone” it enforces in Gaza’s sea space and its violent enforcement methods harm the livelihoods of thousands of fishermen, diminishing what was historically one of the most important sectors in Gaza’s economy. The number of people employed in the fishing sector has plummeted from 10,000 in 2000 to about 3,500 currently. Israel’s actions in Gaza’s sea space are a stark example of the control Israel still wields over the lives of Gaza’s residents. Though this ongoing control comes with responsibilities towards Gaza’s civilian population, including to protect their fundamental rights to livelihood and dignity, Israel uses its control to repeatedly and frequently enact collective punishment against Gaza’s residents.

Israel also severely restricts the entry of items and materials needed to repair boats damaged by Israeli fire or in accidents at sea, putting many boats out of commission. According to the Fishermen’s Union, the Israeli authorities are well aware of the acute need for fiberglass products, steel cables, boat engines and spare parts. Still, applications to coordinate the entry of these products are severely delayed, and often not answered at all, apparently disappearing within the bureaucratic quagmire of Israel’s “dual-use” permit regime. In early April, Gisha sent a letter to Israeli authorities, demanding they allow Gaza fishermen access to the materials, equipment and spare parts they need to repair and maintain their boats.

Now more than ever, Israel must act without delay to remove access restrictions and allow as much economic activity as possible in the Strip to prevent economic collapse following the global coronavirus crisis.