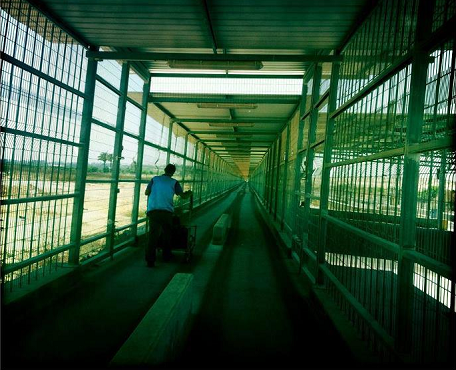 November 3, 2014. Both crossings between Israel and Gaza – Erez passenger terminal in the north of the Strip and the Kerem Shalom goods crossing in the south – remained closed for a second day today. Israel’s defense ministry explained the closure as a response to a rocket fired toward Israel on Friday.

Unlike yesterday, Israel allowed 36 trucks loaded with fuel and cooking gas into Gaza today. Like yesterday, only urgent humanitarian cases were permitted to exit the Strip. Yesterday, 42 patients and their companions crossed into Israel. The Gaza Strip is home to nearly 1.8 million people.

Gisha Director Eitan Diamond sent a letter yesterday to Israeli Defense Minister Moshe Ya’alon demanding the opening of the crossings and to “differentiate between freedom of movement of civilians and actions taken against militants”.

As winter approaches, and in the wake of the recent military operation, civilians in Gaza are increasingly vulnerable. Israel, like dozens of donor countries, has recognized the obligation to allow Gaza’s urgent reconstruction. There is a massive need for construction materials to repair the devastation, and the economy must be allowed to re-start. Just two weeks ago, Ya’alon said (Hebrew): “Of course there’s a need to release the pressure and allow Gazans, and not Hamas, to live in dignity. There are 120,000 people who are homeless because of the operation in the Strip. They paid a heavy price. They need to be allowed to earn a living, and therefore part of our interest is to allow these processes”.

Over the past few weeks, details were published concerning a mechanism meant to monitor the flow of construction materials into Gaza and an IDF Spokesman praised Israel’s allowing Gaza-grown agricultural produce to be marketed in the West Bank. Some changes in the criteria on movement of people led many to think a change was ahead. This was strengthened by statements and analysis (both Hebrew) from military experts that admitted that the closure policy has failed both from a security and a political standpoint.

Unfortunately, this latest act of closure as a response to rocket or mortar fire can be interpreted as collective punishment and represents a disturbing and dangerous regression to a policy that has harmed hundreds of thousands of civilians and also proven ineffective. This is the ninth time in the past two years that crossings are closed in response to rocket fire.