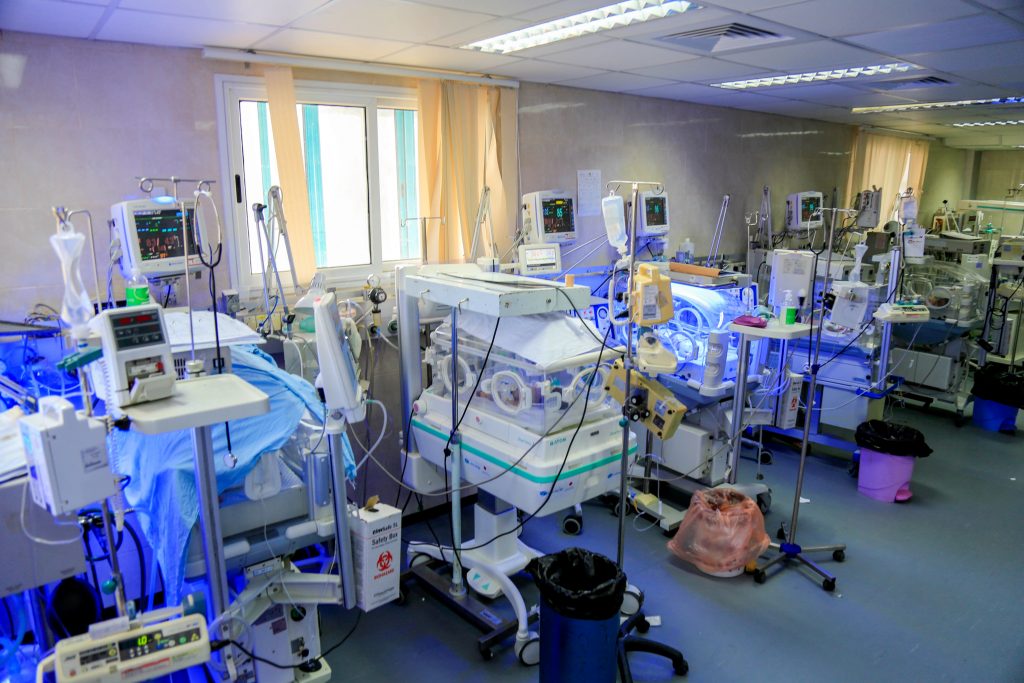 A neonatal intensive care unit in Gaza. Photo by Gisha

August 27, 2020. The de facto Gaza authorities have extended the general lockdown in the Strip by 72 hours, ending Sunday. Movement between Gaza’s districts is forbidden. Only medical facilities and essential services, such as bakeries and water distribution centers, are open. Schools, businesses, mosques, and public institutions are all shuttered. Residents have been instructed to wear masks when leaving their homes to shop for essentials. Kerem Shalom Crossing has been reopened.

So far, a total of 26 cases of COVID-19 have been discovered among the general population in Gaza. All other known cases were discovered among residents who returned to the Strip via Erez or Rafah (37 active cases). Three Gaza residents have died so far as a result of the coronavirus, two of them in the last two days. Since March, all residents returning to the Strip have been sent immediately to government-run quarantine facilities, of which there are 16 in total. If it becomes necessary, some of these facilities will be converted to treatment wards. About 2,269 residents are currently in quarantine centers.

At this time of great alarm and uncertainty, Israel continues to block entry of fuel into Gaza, including for the power plant, which has been shut down since August 18 for lack of fuel. Residents have been receiving no more than 6 non-consecutive hours of power per day. The increase in the overall deficit in electricity jeopardizes hospitals, quarantine centers, waste disposal and water desalination and distribution services, and basic household tasks, including refrigeration of goods, at a time when residents are forced to stay in their homes.

Israel is also continuing to enforce a full maritime closure, in effect since August 16, harming an important source of food and income in Gaza. Since August 11, it has also barred entry of construction materials.

Israel must immediately reverse its measures of collective punishment and allow access to fuel, essential goods, and all that is needed to protect food security for Gaza’s residents and enable economic activity to the greatest possible extent at this time.