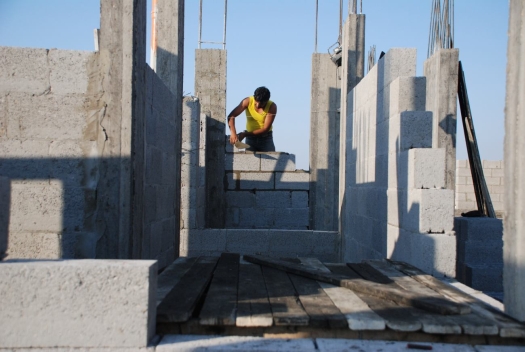 Pessimists will rightly say that 2014 was the worst in memory for residents of Gaza. Optimists might say that 2014 was the first year in which there was a flicker of hope for fundamental change. Everyone will agree that 2014 was momentous for the coastal part of the Palestinian territory. Hostilities in the region escalated dramatically this year, culminating in the 50 days of fighting during Operation Protective Edge. The military operation was preceded by the kidnapping and murder of three teens in the West Bank and increased movement restrictions across the Palestinian territory.

As with the two recent military operations, Cast Lead (2008-9) and Pillar of Defense (2012), movement and access featured prominently in ceasefire negotiations, leading to some changes in policy. Travel for individuals increased in certain categories and in November, for the first time since 2007, barring limited exceptions, transit of goods from Gaza to the West Bank was permitted. Construction materials, needed to repair massive damage to private homes, businesses, and infrastructure sustained during the fighting, entered under the framework of the Gaza Reconstruction Mechanism.

Nonetheless, sweeping and indiscriminate restrictions on travel and on movement of goods between Gaza and the West Bank and Israel remained in place in 2014. Criteria for travel of people remained circumscribed to mostly humanitarian cases as well as “senior traders”, and entrance of construction materials and exit of goods was a fraction of pre-2007 levels.

In 2014, Egyptian military forces continued to destroy tunnels which had been used over the years of the closure of Gaza to smuggle goods and weapons to the Strip.  Rafah Crossing, between Gaza and Egypt, saw frequent closures, leading to a sharp decline in travel in 2014 compared with recent years. From October 25 – December 20, the crossing closed to outgoing pedestrian traffic from Gaza for a record 57 days, trapping students, families and professionals prevented from transiting to third countries via Egypt or Israel. While some passengers stranded in Egypt or third countries trying to return to the Strip were permitted to transit into the territory, between October 25 and the end of 2014, the crossing only opened to outgoing traffic on three days. Egypt cited security concerns as the reason for the closures.

The ban on sale of goods from Gaza to the West Bank and Israel remained in effect for most of 2014 and was partially reversed in November, with the first shipments of agricultural products and subsequently wood and clothing to the West Bank. Israel continued to allow goods to transit through Israel for exit to third countries, but did not allow sale of goods inside its territory, once Gaza’s primary market.

In 2014, 19 truckloads of goods exited Gaza per month, which is less than 2% of what exited before the closure. Prior to June 2007, when sale of goods out of Gaza was blocked, 85% of the goods sold outside the Strip were sold in Israel and the West Bank. 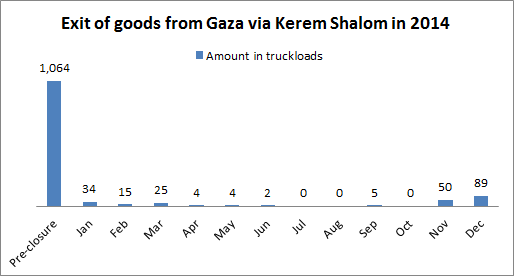 During the first half of 2007, approximately 1,064 truckloads (TL) exited Gaza per month for sale in Israel, the West Bank and abroad, compared to 19 TL/month in 2014. As restrictions on sale of goods from Gaza to the West Bank, once Gaza’s second market after Israel, were lifted, increases in exit of goods were seen in November and December.

Throughout the year, entrance of construction materials for the private sector was blocked, having been halted following the discovery of a tunnel from Gaza into Israeli territory in October 2013. Materials were allowed to enter for select projects implemented by international organizations.

During the military operation, the Israeli military exposed and targeted tunnel infrastructure within the Strip and also tunnels connecting Gaza to Israeli territory. As the hostilities drew down, it became apparent that massive influxes of the banned materials (cement, steel, and gravel – the basic materials needed for construction) would be needed to repair damage to approximately 100,334 homes (including around 17,000 units severely damaged or destroyed), 562 factories, 40 kilometers of roads and, and 27 governmental schools.

The Gaza Reconstruction Mechanism was approved by Israel and the Palestinian Authority following the end of the military operation Protective Edge. While it was designed to allow inflow of goods for the private sector while at the same time preventing materials from being funneled to militant groups, it appears to not be meeting either of its stated objectives. From the end of the military operation through the end of December, some 196,404 tons of materials had entered the Strip (including some 34,570 tons under the mechanism), while need to repair damage from the operation plus to meet cumulative need was estimated at 5 million tons. In other words, four months after the end of the hostilities, just 3.9% of the needed amount had entered. At the same time, there were reports of extensive leakage of the materials on the black market. Prices fluctuated dramatically depending on availability but it was reported that a 25 shekel bag of cement purchased via the GRM could be found on the black market for anywhere between 90-100 NIS.

Repeating the same pattern as 2013, in 2014, Israel closed the Kerem Shalom crossing on five occasions – three times in response to the firing of rockets from Gaza, once following the kidnapping of three teens in the West Bank and once during active hostilities (after what appeared to be direct fire on the crossing) (March 13-18, April 22-23, June 15-16, July 17, and November 2-3). Erez Crossing was also closed on two occasions and operated in a further restricted format on two additional occasions. Both crossings operated in a limited format from approximately June 15 – August 27.

Statements by Israeli officials seemed to indicate that the operation of the crossings was disrupted in response to the rocket fire, but not because of a clear security need, raising questions about the military necessity of the closures and the subsequent harm caused to civilians and to the economy.

During 2014, about 6,270 exits of Palestinians were recorded per month at Erez, most of them businesspeople and medical patients and their companions. The number of exits per month via Erez was 32% higher than the monthly average in 2013. Demand for travel increased over the course of 2014 in response to the closure of Rafah and Israel also allowed more individuals to travel. Criteria for travel changed following the military operation in October (see table on following page). 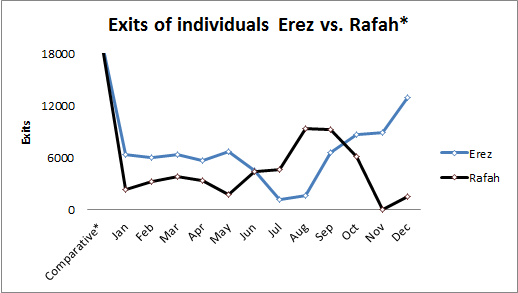 During 2014, Rafah operated erratically. Operations at Erez were further restricted during the military operation, while afterwards saw relative expansions. Comparative figures for Erez are difficult to depict graphically, as in previous periods, more than 500,000 exits of Palestinians were recorded each month. During the first half of 2013, approximately 20,000 exits were recorded at Rafah per month.

* Gisha tracks movement of Palestinian ID holders at Erez Crossing, however data on exits via Rafah are not disaggregated according to passport/ID type. 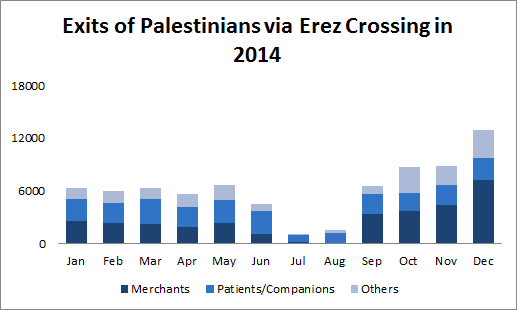 Increases in access for Palestinians at Erez Crossing took place following the end of the military operation Protective Edge and ensuing changes in policy. More exits were recorded of merchants as well as in the “other” category, which included humanitarian cases and approximately 800 exits per month of individuals going to pray in Jerusalem.

[1] We note that this table is based on information released by the Ministry of Defense and does not necessarily reflect implementation or practice.

Following Operation Pillar of Defense (Nov. 21, 2012), Israel extended the fishing limit off the Gaza coast from 3 to 6 nautical miles. The extension was reversed in March 2013 following incidents of rocket fire and then extended again in May 2013. On July 6 of this year it was again reduced to three nm and extended back to six on August 27 following the end of the military operation.

Following the end of the military operation, Israel was reported to have reduced the area of the “buffer zone” from a distance of 300 meters from the border fence to a distance of 100 meters. Gisha has not yet received any official statement about this and is pursuing an official comment by the Ministry of Defense.