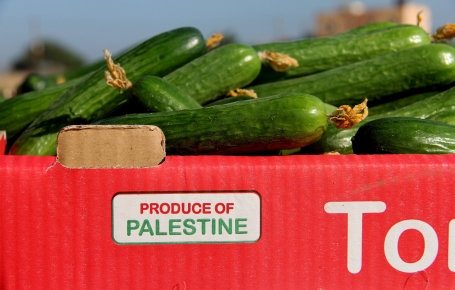 This marks the first time that goods from Gaza are being sold in the West Bank since June 2007. Photo: Gisha

November 6, 2014. After more than seven years in which Gaza residents were prevented from selling their goods in the West Bank, a truck carrying 10 tons of cucumbers, which are to be sold in Hebron, left this morning for the West Bank via Kerem Shalom crossing.

This marks the first time that goods from Gaza are being sold in the West Bank since June 2007, when Israel imposed a blanket ban on the marketing of goods from Gaza to the West Bank and Israel. The effect of the ban on Gaza’s economy has been extensive. Before the closure, about 85% of the goods leaving Gaza were sold in Israel and the West Bank. On the eve of the closure, a monthly average of 1,064 trucks exited Gaza; the monthly average in 2014 was less than 1% of this figure at only 10 trucks per month. Gaza farmers now believe that should the marketing process be made straightforward and clear, they will be able to sell up to 30% of their production, between 100 and 150 trucks per month, to markets in the West Bank.

Permitting the marketing of goods from Gaza to the West Bank is a welcome development that, hopefully, will not stop at agricultural products but will include other commodities as well as access to markets both in the West Bank and Israel.  “The ability of Gaza’s manufacturing sector to access its natural markets in the West Bank and Israel is vital for reviving the economy in Gaza,” said Gisha Executive Director Eitan Diamond. “It’s common knowledge that the closure policy failed and that reconstruction is an imperative. We hope that there will not be a recurrence of the actions of this week, in which the crossings between Israel and Gaza were again closed as a punitive measure. The ability to lead a normal life is not a prize, but a necessity, and not only for Palestinian residents of Gaza, but for the region as a whole”.

The political and military echelons in Israel have ostensibly recognized the importance of economic renewal following Operation Protective Edge. Israel’s defense minister and chief of staff said after the operation that rebuilding the Gaza Strip is an Israeli interest. In the words of the chief of staff: “Peace also depends on the continued aim of creating economic hope there [in Gaza]”. Greater access will be key to making the rhetoric a reality.

Two weeks ago, there was a failed attempt to transfer a shipment of dates and sweet potatoes from the Gaza Strip due to lack of clarity regarding the procedures for packaging the goods and how to load the trucks. The cost of the aborted attempt for farmers reached tens of thousands of dollars per truck. Also, profits that farmer Abed Al Rauf Abu Safar will reap from his cucumbers today are minimal, but he explains that, “Hopefully this will open the way for others. All the other traders are watching to see if this works so that they can begin marketing their own goods in the West Bank too. There are still problematic restrictions for us, such as the requirement on pallet height, but hopefully this will change in the future and will make the transfer of goods more economically viable”.