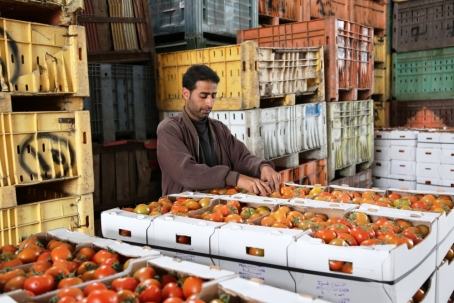 March 12, 2015. For the first time since 2007, Gaza farmers will be able to sell produce in Israel on a somewhat regular basis. Two trucks loaded with 25 tons of tomatoes and eggplants left Gaza today for Ashdod and Jerusalem. More trucks are scheduled to leave on Sunday, one of them destined for Bnei Brak.

On two separate occasions in previous years, Israel has made exceptions for the sale of “lulavs” from Gaza in its territory. Lulavs are young palm tree shoots used in the religious rituals practiced during the Jewish holiday of Sukkot, and the sale of lulavs from Gaza was approved in response to a temporary price hike on Israeli-grown lulavs in those years. Similarly, the current approval was also motivated by religious needs, as observing Jews practice the custom of “shmita” this year, during which farmland is left to lay fallow.

In recent months, Israel appears to have begun a gradual, tentative retreat from some of the restrictions it had imposed on the sale of Gaza goods outside the Strip, previously permitted only abroad.  In November of 2014, produce was cleared for sale in the West Bank, followed by seafood, wood and textiles.

Produce is expected to depart Gaza to Israel on Sundays, Tuesdays, and Thursdays, following a similar schedule to the one used for produce shipments to the West Bank. For now, approval has been given for 27 tons of tomatoes and 5.5 tons of eggplant per day. Approval for cucumbers and zucchini is pending. The produce shipped out today belongs to three merchants, Abd a-Rauf Abu Safer and Sami al-Akra, who shipped tomatoes and Ashraf Daghmal, who shipped eggplant.

Over the past week, 17 traders sent samples of their produce for phytosanitary inspection in Israel, at a cost of 20,000 NIS, which came from their own pockets. Fifteen of the traders have received approval to sell their goods in Israel, but only three were able to prepare a large enough shipment to be sent out today.

Before the closure was imposed, about 85% of all goods shipped out of Gaza were sold in Israel and the West Bank. Israel was Gaza’s main trade destination, where Gaza merchants sold produce, furniture, textiles and more.

Gisha welcomes these steps to allow access to the Israeli market for Gaza farmers but cautions that much more needs to be done to ensure the real recovery of Gaza’s economy, which remains a shared goal for all residents of the region. We hope this development heralds more extensive and diverse trade between Gaza and Israel that is unencumbered by restrictions or limited by timeframes.