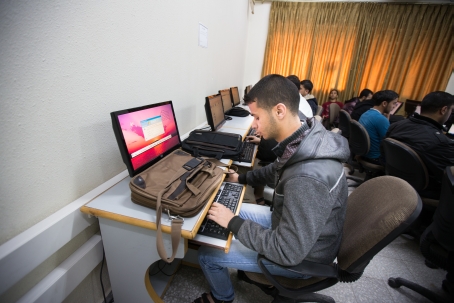 The document was removed from COGAT’s website. Students in Gaza. Photo: Eman Mohammed.

Update – February 18, 2015, 18:15: The Coordinator of Government Activities in the Territories (COGAT) contacted Gisha this evening to inform us that there had been a “clerical error” in the “Closure Permissions Status” document and that in contrast to what had been published, no permits will be issued for 50 students to travel from Gaza to the West Bank. The “Closure Permissions Status” document contains the orders that detail what restrictions apply on the passage of goods and movement of people to and from the occupied Palestinian territory at any given time. The document has now been removed from COGAT’s website.

February 18, 2015. Today, the Coordinator of Government Activities in the Territories (COGAT) announced that he will be allowing students from Gaza to study in the West Bank for the first time since the year 2000.  Israel has so far staunchly refused to allow students from Gaza to travel to the West Bank for academic studies, claiming students pose a security threat and that allowing students to travel goes against the “separation policy”.

The new “closure permission status” (Hebrew) document, which lists, among other things, the criteria for applications to travel through Erez Crossing, states: “Students are permitted to exit for the purpose of academic studies in Judea and Samaria [the West Bank], subject to a quota of 50 students”. It is hard to discern from the document what time frame the quota refers to, or the criteria by which students will be permitted to exit. The permit may be for the September academic term.

Gisha has been working to promote freedom of movement for students for close to a decade. We have petitioned the High Court of Justice (HCJ) on several occasions on behalf of students from Gaza who wanted to study occupational therapy in the West Bank. The state opposed, saying that students are collectively considered a risk group and that West Bank universities are “greenhouses for growing terrorism”. The HCJ rejected Gisha’s petition in 2007, but recommended to set up a mechanism for reviewing cases on an individual basis. The HCJ rejected another petition filed by Gisha in 2010.

In September 2012, the HCJ rejected a petition filed by Gisha and Al Mezan Center for Human Rights on behalf of five women from the Gaza Strip studying gender, democracy and law, who asked to travel to Birzeit University in the West Bank. The court accepted the state’s position that Israel has no obligation to ensure Gaza residents’ right to study in the West Bank, that it had a right to deny the students’ transit through its territory and that setting up a mechanism to review exceptional cases would impinge on the right to equality.

It appears that in the months that have passed since Operation Protective Edge, top security officials have come to recognize how essential the connection between Gaza and the West Bank is for Gaza’s rehabilitation and recovery, the advancement of which has been publically acknowledged as in Israel’s interest. It remains to be seen whether this results in more meaningful changes to access in and out of Gaza. We hope that this modest quota is just a first step on the way to allowing Gaza residents to reach educational opportunities and to fulfil their potential.