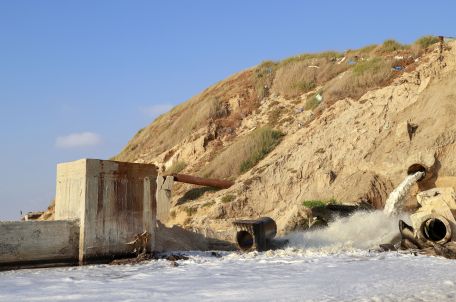 Sewage flowing to the sea in Gaza, 2019. Photo by Asmaa Elkhaldi

August 29, 2019. On Sunday, Israel announced that according to the decision reached by Prime Minister and Minister of Defense Benjamin Netanyahu, it would restrict the transfer of fuel destined for Gaza’s sole power plant and would only enable half the quantity of fuel to enter the Strip “until further notice.”

Israel’s decision directly impacts the overall electricity supply available in the Strip, impairing everyday life and further disrupting civilian infrastructure. Already on Monday, one of the three turbines that had been operating in Gaza’s power plant prior to Israel’s decision was shut off, bringing the plant’s production down from 65 megawatts to about 45 megawatts. Yesterday, Mohammed Thabet, spokesperson of the Gaza Electricity Distribution Company, said that in addition to the 120 megawatts purchased from Israel and supplied through direct power lines, current electricity supply to the Strip was only 165 megawatts. The current demand for electricity in Gaza is estimated at 450-500 megawatts.

One critical consequence of Israel’s decision is the impact of reduced electricity supply on the operations of the sewage treatment system. Approximately 110,000 cubic meters of sewage are pumped in to the sea every day. Maher Al Najjar of the Gaza Coastal Municipalities Water Utility estimated that only about 60 percent of the sewage being pumped into the sea will undergo some form of treatment, down from about 85 percent before the reduction.

The distribution of water to homes in the Strip has also been affected. Al Najjar estimates that the frequency of water distribution has declined from an average of once every three days to once every four or five days. Consequently, average water consumption per person per day has dropped from approximately 80 liters to about 60 liters.

Israel’s decision to deliberately reduce the supply of a basic humanitarian commodity, knowingly harming the civilian population in Gaza, constitutes illegal collective punishment. The decision to cut fuel supply to Gaza’s power plant has nothing to do with the security of Israeli citizens. Israel must reverse this wrongful measure immediately and renew the full transfer of fuel to the Strip.