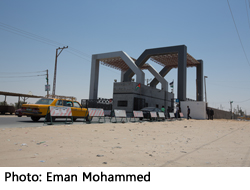 May 22, 2013. After five days of being closed, Rafah Crossing was opened today to passage of people. This following the release, earlier today, of seven members of the Egyptian security forces who had been held captive in the Sinai since Thursday.

Egyptian security forces closed the crossing on Friday in response to the capture of their colleagues. About 2,600 Palestinians were stuck on the Egyptian side of the crossing, including medical patients, pilgrims, and students. Approximately 600 of them did not have a place to sleep at night and waited at the crossing itself for it to open. According to Palestinian officials, about 1,500 people were waiting on the Gaza side of the border in order to cross to Egypt and other countries.