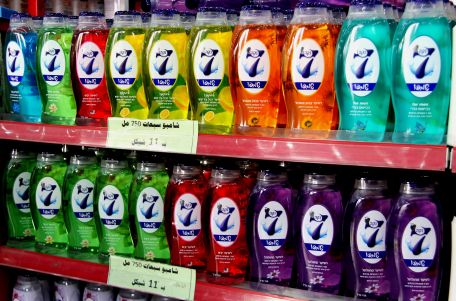 Shampoo bottles in a Gaza supermarket

March 9, 2014. Gaza residents eat Israeli hummus and cheese, drink Israeli instant coffee and use Israeli shampoo. In 2012, the value of Israeli goods sold in Gaza was 1.3 billion shekels. But while Israel profits from the Gaza market, it denies Gaza’s residents the same opportunity. A news report by Elior Levy and Iris Lifshitz-Kliger offers a unique look at the unusual economic relations between Israel and the Gaza Strip.

“The demand in Israel for Gaza products still exists, and both sides would benefit from it as many products such as fruits, furniture and clothes are cheaper to produce and manufacture in Gaza,” said Sari Bashi, executive director of the Israeli charity Gisha (“access”) dealing with Palestinian freedom of movement in the territories.