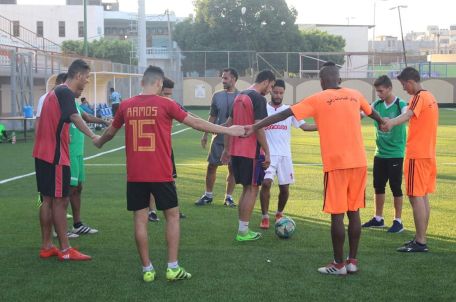 September 23, 2019. This morning, Jerusalem District Court Justice Moshe Sobel accepted the position of the Coordinator of Government Activities in the Territories (COGAT), who denied permit applications by 24 team members of Gaza-based football (soccer) club and Gaza Strip cup holder, Khadamat Rafah, to travel to a Palestine Cup final rematch against FC Balata. Justice Sobel approved the recommendations of the Israel Security Agency’s (ISA) to deny permit applications by 24 club members, and recommended that the petition be deleted.

For more than two months, Israel has prevented the Khadamat Rafah club from traveling to the West Bank for a final rematch against its West Bank competitors, Balata Refugee Camp club, FC Balata. The two clubs faced off on June 30 in Gaza, with the match ending in a 1:1 draw. The rematch was scheduled to take place in the West Bank on July 3. The club that wins the two-match playoff is due to represent Palestine in the Asian Champions League.

Ahead of the rematch, the Rafah club submitted detailed permit applications for its 22 players, and 13 members of the coaching team and executives. Three days before the scheduled match, the club’s spokesperson was notified that only four applications were approved by Israel, of which only one of them was of a player. The remaining 31 permit applications were denied on unspecified ‘security grounds.’ The match was rescheduled for September 25, and new applications with supporting documents were submitted to COGAT on August 21. On Monday, September 16, COGAT responded that 11 members of the club would be permitted to travel, but among them only six players.

Last week Gisha petitioned (Hebrew) the Jerusalem District Court demanding that it instruct COGAT to approve the team for travel. The petition notes that the Palestine Cup is a FIFA-recognized tournament, and that any further delay of the rematch would jeopardize the winning club’s entry into the Asian Champions League. Sporting events are listed in Israel’s narrow criteria for eligibility for travel permits.

This case is another illustration of the extraordinary effort Israel exerts to prevent Palestinian travel between the parts of the Palestinian territory as part of what it calls the “separation policy,” which systematically violates Palestinians’ right to freedom of movement and undermines the functioning of Palestinian society as a whole. The ease with which the state applies sweeping and arbitrary “security blocks” against Palestinians wishing to travel in a variety of circumstances demonstrates how little regard Israel has for the severe impact of its actions on civilians in the occupied Palestinian territory.

*A previous version of this update stated incorrectly that 12 team members had been approved, instead of 11.