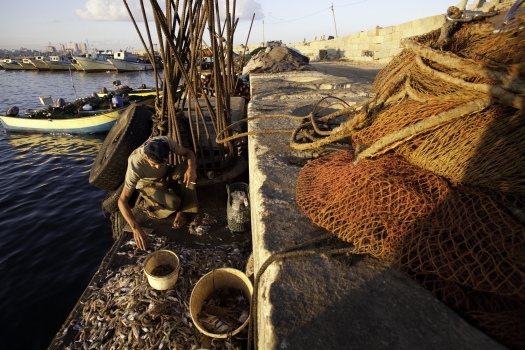 Sources inside the Strip report that fishing in the area has become increasingly unsafe. Photo: Eman Mohammed

Yesterday marked the end of a three-day strike declared by Gaza’s fishermen in mourning and protest over the killing of one of their colleagues and the injury and arrest of two others by Israeli naval forces last Saturday. This was the first time since the deadly fighting over the summer of 2014 that a fisherman has been killed off the coast of Gaza. Sources inside the Strip report, however, that fishing in the area has become increasingly unsafe and that naval forces fire on fisherman sailing no farther than six nautical miles off the coast – the Israeli-imposed fishing zone.

Palestinian human rights organization Al Mezan said that the fishermen were shot at a distance of only four nautical miles off the coast, a statement that has been confirmed by the Gaza Strip Fishermen’s Association. In fact, according to the Palestinian agricultural coordinator, most cases in which Palestinian fishermen were shot or arrested occurred at a distance of four to five nautical miles off the coast. Gaza fishermen have reported difficulties fishing in the permitted fishing zone due to heavy fire toward them.

Mohammad, 16, told Oxfam: “We were about three miles out when the (Israeli) military boats approached us and shouted at us to jump in the water and swim towards them. My friend who was with me immediately jumped. But in winter you can imagine how cold the water is… I was too scared and panicked and refused to jump. Then one of the soldiers shot me in the hand with a rubber bullet. They brought their boat next to mine and arrested me. We were taken away, interrogated and released the next day. But they didn’t return our boat and fishing nets. We lost everything”. Mohammad’s father estimated the damage he sustained at 17,000 USD. Oxfam said there were dozens of similar reports in January and February of 2015 – fishermen who were shot, arrested and had their equipment confiscated even when they were fishing inside the permitted fishing zone.

It is important to note that the enforcement of travel restrictions cannot be achieved through live fire. According to both Israeli and international law, the use of live fire is allowed only as a last resort, in cases where there is an immediate and substantial threat to one’s life, and in circumstances where self-defense is not possible by less violent means. In light of the ongoing incidents of fire, which Gaza fishermen report experiencing, and the fatal shooting in the case described above, it is hard not to get the impression that the navy deviates from these rules at the expense of the right to life and physical integrity of the fishermen.

Israel has been imposing fishing restrictions off Gaza’s coast for years, without really clarifying the difference between three, six or say nine miles. In the Oslo Accords, Israel undertook to allow fishing at a distance of up to 20 nautical miles off Gaza’s coast, but the maximum distance that was actually permitted was 12 miles. In 2006, after Israeli soldier Gilad Shalit was taken captive in the Strip, Israel reduced the fishing zone to six nautical miles and it has since fluctuated between six and three nautical miles at different times. Officially, the fishing zone currently stands at six nautical miles off the coast, which is far from sufficient for the needs of Gaza’s fishermen, one of the Strip’s most disadvantaged populations.

Gaza’s fishing industry has a long and proud history. When the closure was imposed in 2007, Gaza’s fishermen could no longer sell their catch in Israel and the West Bank. The restrictions on the fishing zone have also significantly reduced the catch and caused overfishing in the permitted zone which resulted in a depletion of fish breeding grounds.

To the best of our knowledge, Israel has never explained why Gaza’s fishermen are confined to six nautical miles off the coast. The frequent reduction of the fishing zone following rocket fire toward Israel, and its expansion as a “humanitarian gesture”, raise grave concern that the size of the fishing zone is not determined solely by security factors.