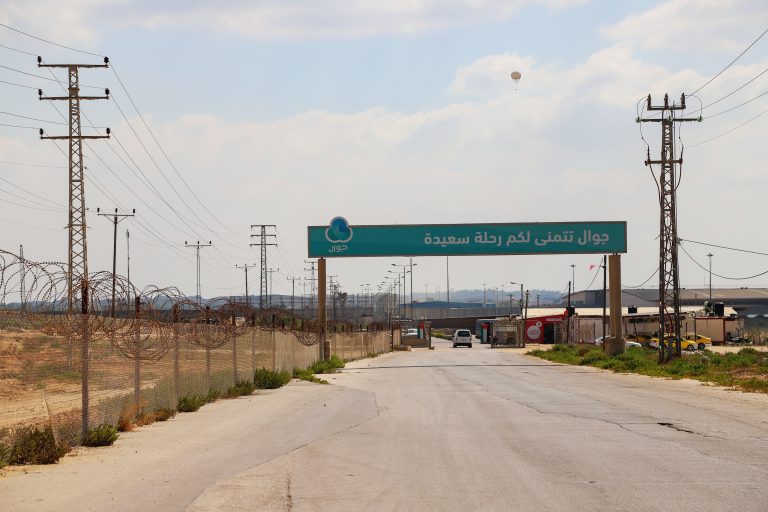 A view of Erez Crossing from within Gaza. Photo by Asmaa Elkhaldi

June 2, 2020. On May 21, the Palestinian Authority (PA) ordered the Palestinian Civil Affairs Committee (PCAC) in Gaza, the body responsible for liaising with Israeli authorities regarding permit applications submitted by Gaza residents, to sever ties with Israeli coordination authorities. The instruction was given following the PA’s decision to halt security and civilian coordination with Israel, which came in response to Israel’s plan to officially annex parts of the West Bank.

Travel through Erez Crossing is already extremely limited at the moment given measures taken to curb the spread of the pandemic, with exits from Gaza limited almost entirely to a small number of (non-COVID) medical patients with referrals for life-saving treatment that is unavailable in the Strip, and their companions. The little movement of people via Erez Crossing that Israel had permitted prior to the pandemic outbreak, which included people traveling to visit family for exceptional humanitarian reasons, as well as businesspeople and laborers, has been blocked since March 8.

Under the PA’s instruction, the PCAC staff has stopped receiving new permit applications from Palestinian residents of Gaza, halted further processing of pending applications, and ended all communications with the Israeli military authority of the Coordinator of Government Activities in the Territories (COGAT) and its operative unit, the Gaza Coordination and Liaison Administration (Gaza CLA) at Erez Crossing. Only applications for life-saving medical treatment that are filed by hospitals in the Strip on behalf of patients in critical condition are being forwarded by the PCAC to the Israeli authorities. Other patients seeking life-saving medical treatment that is unavailable in the Strip are currently receiving responses to existing permit applications through human rights organizations, the hospitals they are referred to for treatment, or directly from the Israeli authorities.

Iman Shannan, director of the Program for Aid and Hope to Cancer Patients (Al Awan ul Amal), an organization assisting Palestinian women with cancer in Gaza, told Gisha that the full repercussions of the PA’s decision are not yet clear. In recent months, amid the fear of a coronavirus outbreak, some cancer treatments that were previously unavailable in the Strip have been made available and are now offered locally. Some patients who need treatment that is still unavailable in Gaza had chosen not to travel, due to the risk of contracting the coronavirus as well as the requirement of 21 days of quarantine in government-run facilities upon returning to the Strip. “The situation is very complex,” she says. “I worry about those who need radiation therapy that isn’t available in Gaza.”

According to the Gaza Ministry of Economy, movement of goods to and from Gaza has not been affected by the halting of coordination. Online coordination continues as usual.

Since March 8, travel through Erez has been limited to an even greater extent than usual due to measures taken to curb the spread of COVID-19. Exits from Gaza to Egypt via Rafah Crossing were stopped on March 12, and two weeks later, the crossing was closed to entry into Gaza as well. In the weeks since, Rafah Crossing was opened twice, once in April and once in May, for residents returning to the Strip via Egypt. Erez Crossing was also opened twice for residents returning to the Strip from Jordan via Allenby Bridge Crossing. All residents entering the Strip are sent to quarantine facilities set up by local authorities. These facilities are also where all of Gaza’s verified COVID-19 cases have been discovered. Given the rising number of cases among returning residents who entered in May, the Gaza Ministry of Interior announced that Erez and Rafah will remain closed until June 30.

To date, Gaza has had 61 verified cases of COVID-19; one woman died of the disease, and 18 people have recovered. About 1,500 people are currently quarantined in Gaza’s 13 isolation facilities.

Gisha continues to monitor these developments with concern. We reiterate that Israel’s ongoing control over countless aspects of life in Gaza comes with a responsibility to safeguard the rights and basic living conditions of its civilian population. All parties, including Israel, Hamas, and the Palestinian Authority, must protect the rights of Palestinians in Gaza, including the fundamental right to freedom of movement. Basic rights must not be used as political bargaining chips at the expense of Gaza’s civilian population.