Basma Abu Mustafa realized her dreams when she started a business that both supports her family and inspires other young people. But she can’t reach her full potential under closure.

“I’d always wanted to be a physician here, in the area where I grew up. The closest pharmacy and medical center are a twenty-minute drive away, and ever since I was a teenager I’d wanted to do something for my community.” Basma Abu Mustafa, 23, lives in a rural area in Gaza’s Khan Younis district with her parents, three brothers, and two sisters. When studying medicine proved to be out of reach, she enrolled in a four-year pharmacy and nutrition program at university. “I worked at various pharmacies,” she says, “but some days, I didn’t have enough money for the bus back home.”

Abu Mustafa’s father was very encouraging of her academic pursuits. He had suffered a stroke and was forced to leave his job as the director of an international organization. Her mother, who had graduated with a degree in social work, was unemployed. The family fell on hard times. “To make money, my younger siblings would pick oranges and sell them on the streets.” Then Abu Mustafa heard about a special course focusing on the pharmaceutical and cosmetics industry. “I enrolled, and even though I had no income throughout the program, it felt good. My depression and frustration were alleviated. The end of the program marked the beginning of my path forward.” 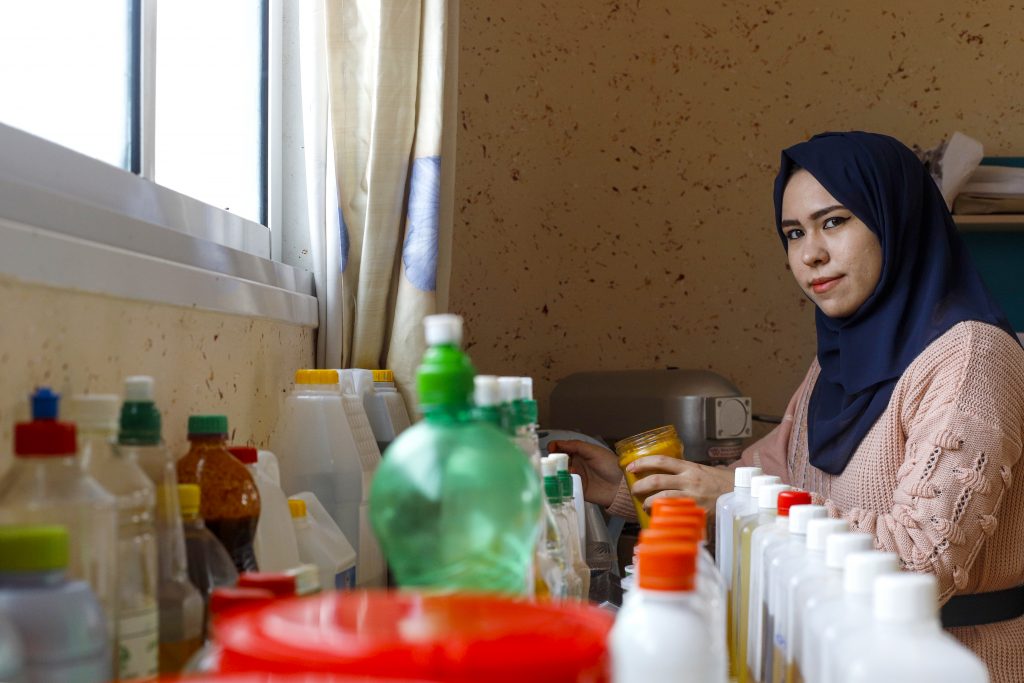 Orders come in from the West Bank, Israel, Turkey, and Jordan.

Near the end of 2019, she began implementing what she had learned in the course and opened a business. “I had several motives,” she explains. “The main one was our financial situation. We had nothing. My siblings, who had finished high school, chose not to go to university, partly because they saw it didn’t help me, and so many others, find work. Another reason was my mother. She had suffered burns on her face from an accident in the kitchen. When it happened, I sent my brother to the pharmacy downtown right away, because, as I said, there are no pharmacies in the area. It took him 50 minutes to return. My mother is very beautiful. It made me sad to see her injured face. I researched and developed an ointment made of natural oils to treat burns. She was the first to try it out. The result was very good.”

To turn her ointments into a business, Abu Mustafa had to sell a necklace she had been given as a child. She got about 1,000 ILS for it (about 310 USD), and used half the money to buy raw materials. Then she set up a workspace in the hallway of her parents’ home, and got to work. “The first product I made was hair oil. I tested my products on my parents and neighbors. Then I started advertising on Facebook, with photos of the product, their prices, and so forth.” 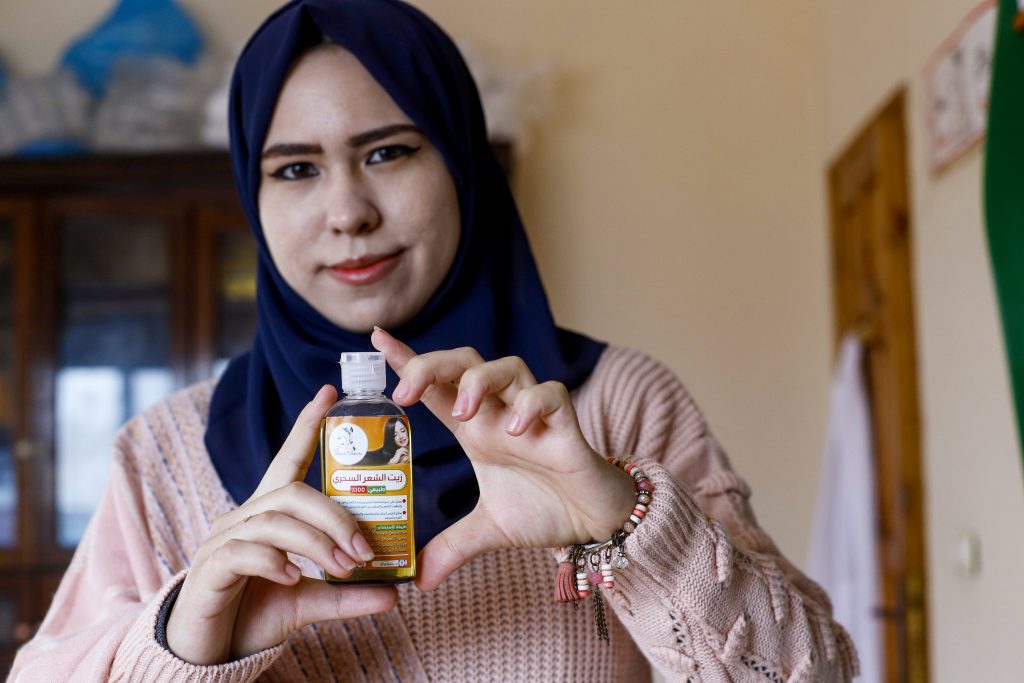 The first product she made was hair oil.

Calls came in from all over the Gaza Strip. Within the first year, Abu Mustafa had made thirty different products, including ointments, oils, and a weight-loss drink. “The best-selling product in Gaza is a therapeutic face soap. As orders grew, my father took over shipping. We turned the living room into a workshop, where we filled the containers and prepared them for shipment. With our living room taken over by the business, we had to host guests in our yard.”

The entire family works in the business, and Basma sometimes hires an extra worker to help fill orders. “In the beginning, I’d work for five or six hours just mixing the ingredients by hand. I’d go to sleep aching all over. I haven’t received support from any organization yet, and I’m still missing some crucial equipment. I recently bought some for 500 USD, which has made work easier.” 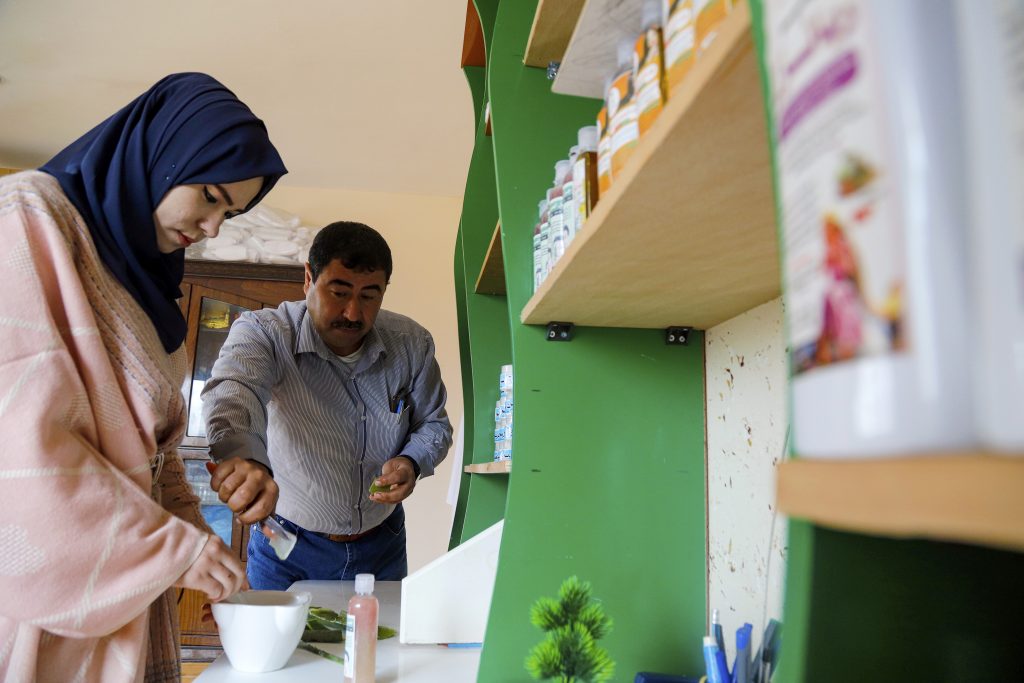 Basma and her father make a product.

Abu Mustafa’s business has earned back every penny her parents invested, and her siblings have been able to continue their studies. Success, she says, has done more than just improve the family’s financial situation; her business has also inspired young women in the area. Orders come in from the West Bank, Israel, Turkey, and Jordan. Israel, however, does not allow commercial shipments of this kind to exit Gaza. “My weight-loss drink and the matching ointment have a lot of potential,” she estimates. “I sell the kit for 30 ILS (less than 10 USD). There’s a company out of Malaysia that sells a similar product for 100 ILS (30 USD), but because of the situation at the crossings and travel restrictions, I can’t compete with them. We have competition inside Gaza too, but, thank God, I have confidence in my products.”

The early days of the coronavirus outbreak in March 2020 revealed a surprising upside for Abu Mustafa’s business. “Women stayed home, they had more time to themselves, which led to an uptick in orders and sales.” Later, as summer drew closer, she felt a drop in sales. “It’s a crosscutting, global issue. There’s not much I can do.”

To grow her business, she needs investment. “I filed applications with multiple organizations, but I haven’t received any support yet,” she explains. Abu Mustafa wants to transfer the family enterprise outside the home. “For that, I need a permit from various government offices. Licensing the products costs almost 150 ILS each. I also need more mechanical equipment, a fridge, and professional work tools.” 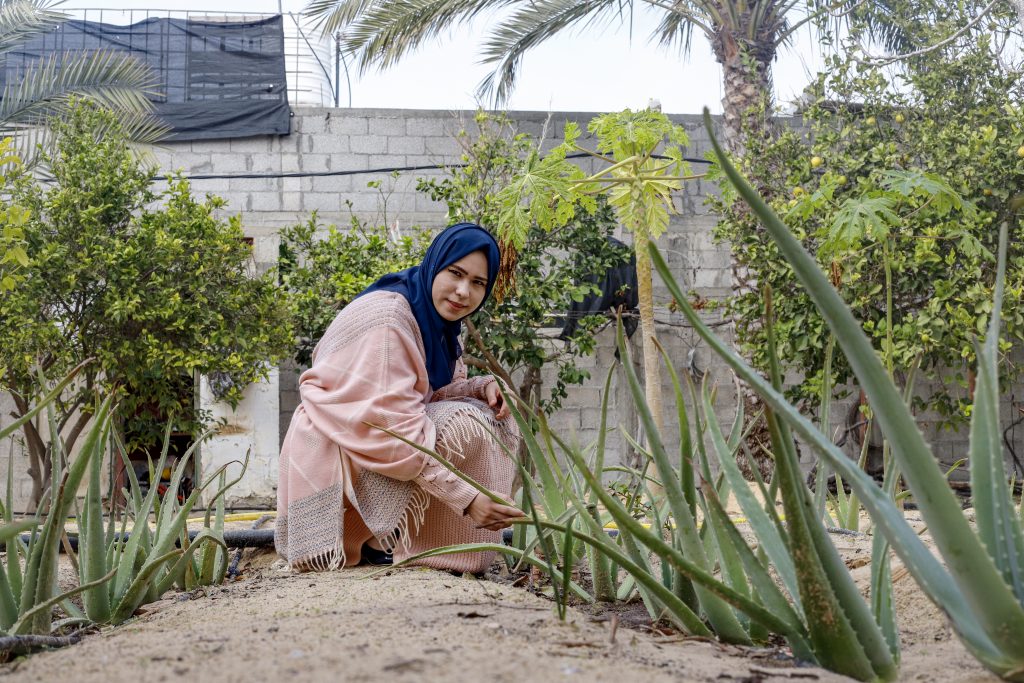 Collecting raw materials from the garden.

Some raw materials are defined by Israel as“dual-use,” meaning their entry into Gaza is denied or delayed. One such item is glycerin, the key ingredient in soaps and ointments. “It’s very difficult to make products without it,” says Abu Mustafa. The same holds true for cocoa and shea butter, among others. “My raw materials are expensive, mostly because they’re rare in Gaza. If there were more of them, they would cost less, and then I could produce more and make a profit.”

Abu Mustafa has big goals for the future. “I dream of running an advanced medical center, with a diagnostic unit and a production unit that would focus on women’s health and beauty. I also want to continue my studies, to get a graduate and a postgraduate degree.” 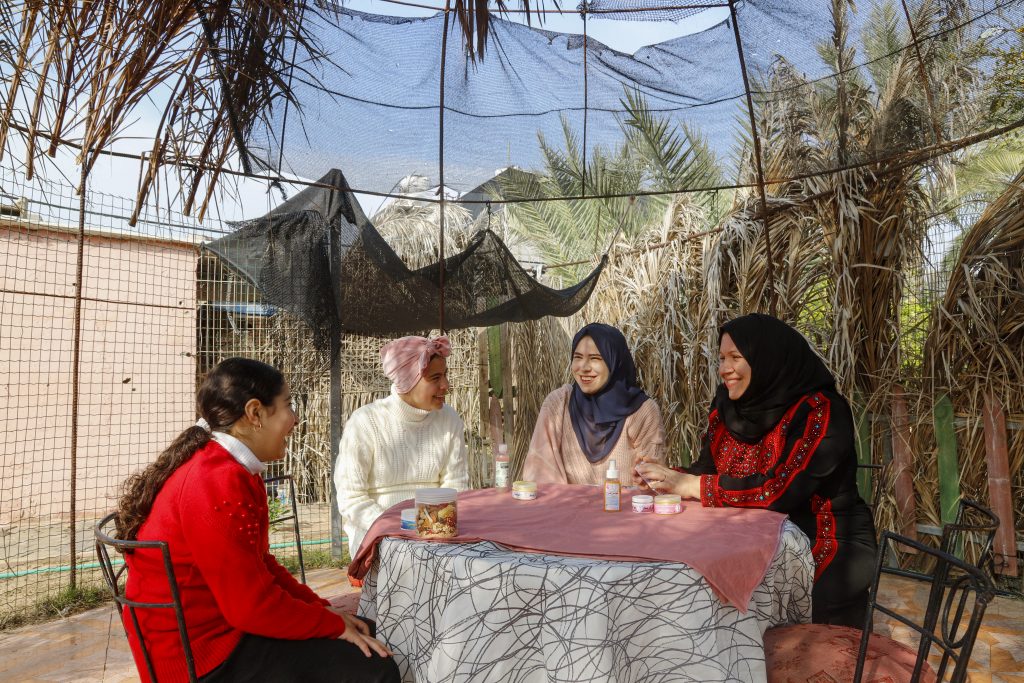 Trying out products with family and friends.