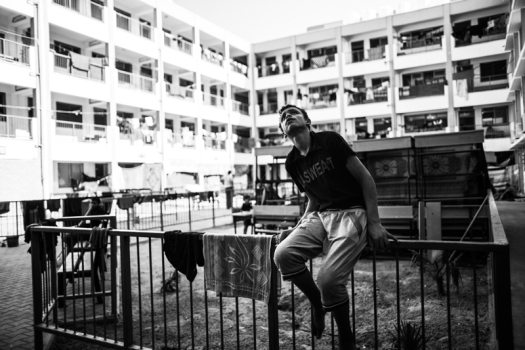 Until only six years ago, coriander was banned from entering the Gaza Strip. Coriander, chocolate, toys, certain fruits, and notebooks were classified as “luxuries” and permission to bring in these items was dependent on the will of unnamed officials in Israel’s Ministry of Defense. The policy was openly described as part of a strategy of “economic warfare” against the Strip. In limiting entrance of goods, Israel hoped, among other things, to pressure residents of Gaza to overthrow the Hamas regime.

In time, it became clear that shortages of chocolate and toilet paper in the Strip wouldn’t lead to an overthrow of Hamas, but the policy continued and additional justifications for it were cited. Decision-makers said preventing the entrance of goods to Gaza was part of a policy of distinguishing between the Hamas government in Gaza and the Fatah government in the West Bank and also that Gaza residents shouldn’t be able to “eat kiwi over Gilad Shalit’s head”, referring to the Israeli soldier who had been held in captivity in the Strip.

Construction materials were also among the items banned for entrance to Gaza (along with kiwis) in 2007. Israel at first said construction materials could be used to build military fortifications or bunkers and, later on, tunnels. The ban remained in place even when it was clear that enormous quantities of construction materials were entering Gaza through a vast network of underground tunnels from Egypt and that the ban on their entrance via Kerem Shalom mainly impacted international organizations in Gaza trying to undertake projects for a civilian population in tremendous need.

In 2010, after the flotilla incident drew the world’s attention to Israel’s draconian goods policy, Israel decided to begin allowing most civilian goods into Gaza. Suddenly a consensus of voices agreed that the previous policy was a mistake. Even Benjamin Netanyahu, the current prime minister and prime minister at the time, admitted that “the civilian closure harmed the security closure”.

For years, Israel had restricted the entrance of certain civilian items into Gaza and the West Bank, claiming they could be used for military purposes, but in 2010, despite the goods policy “reversal” on Gaza, Israel created and continued to manage a separate list of items that were restricted from entering Gaza only. The list was a “gray list”, meaning that items could ostensibly still be brought in, but under certain unclear conditions and only with special permission. More on that below.

Following Operation Protective Edge in 2014, Israel decided to allow the supervised entrance of construction materials into Gaza for the private sector. However, many items are still restricted and in the last few months, the list of items classified as “dual-use” has even grown. For example, wood planks beyond a certain dimension were added, bringing an already devastated furniture industry to a near halt. Uninterrupted Power Supply (UPS) devices were added to the list, despite the regular power outages that afflict the Strip. Israel also restricts the entrance of castor oil, fertilizers, x-ray machines, cranes and heavy lifting equipment, pipes, batteries, and welding equipment.

These are basic civilian items, essential for reconstruction and everyday life. The shortages and absence of certain items caused by the restrictions impede humanitarian work and development, including the possibility of developing solutions to the myriad challenges Gaza faces like in the areas of water and sanitation.

These are the main issues we take up in a new info sheet on the Gaza “dual-use” list:

Israel continues to control the single goods crossings that must sustain the 1.8 million people of the Gaza Strip. It also controls the Palestinian population registry, decides what reconstruction will take place, designates the area of farmland near the border fence, defines the scope of communications networks, and severely restricts the movement of people to and from Gaza. This level of control imposes on Israel a series of obligations, both moral and legal, not to mention the fact that even the Israeli military sees the security benefits of facilitating access. Israel must facilitate the entrance of crucial civilian goods and items essential for everyday life.

The information sheet we are posting today marks the beginning of an examination of the way Israel manages the list of “dual-use” items that require special permission to enter the Gaza Strip. It includes legal and practical information, as well as a sense of the far-reaching implications of the restrictions for residents of the Gaza Strip. In the coming months we plan to share the stories of those affected by the list and will continue to publish new information we succeed in revealing about the “dual-use” policy.