Eight months ago, on October 13, 2013, the Ministry of Defense ordered that the transfer of building materials into the Gaza Strip be halted. The decision was made in response to the discovery of an underground tunnel dug from Gaza to Israel. The tunnel’s exit was located near Kibbutz Ein Hashlosha, some eight kilometers from Khan Yunis. Since then, Israel has refused to allow building materials, destined for the private sector, into Gaza.

The decision, made when almost no construction materials were entering Gaza through the tunnels, spelt the collapse of Gaza’s building sector, which had accounted for up to 27.6% of Gaza’s GDP and provided a source of income for about 70,000 individuals, whether directly or through supporting industries. The decline was rapid. Only a few kept their jobs – mostly those working on construction projects funded and run by international organizations. Gaza’s unemployment rate rose from 27.9% in the second quarter of 2013 to 40.8% in the first quarter of 2014. There are now 180,200 people out of work of in Gaza, many of them former construction workers. 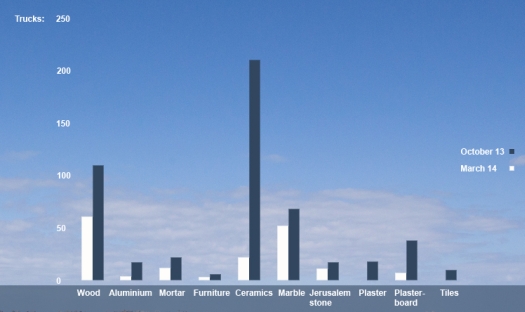 While Israel severely limits the transfer of steel, cement and gravel, it allows supplementary materials to enter: marble, tiles, ceramics, etc. This graph, based on UNSCO reports, compares the quantity (in truckloads) of supplementary materials that entered Gaza in October 2013 to the quantity that entered in March 2014. The drop reflects the sharp decline in construction in Gaza.

And on top of all this, is the pressing need for construction materials. Over the years, Gaza has developed a housing shortage of about 75,000 units. The Gaza Housing Ministry estimates that this deficit increases by 800 to 1,100 units every year due to population growth.

Although this decision has seriously impacted the lives of Gaza’s residents, and although doubts have been raised as to whether the tunnel to Ein Hashlosha was built using cement from Israel, and although small quantities of construction materials continue to trickle into Gaza through the Rafah crossing, the ban remains in place. This is not news. But, with every day that goes by, more people in Gaza lose their jobs, more apartments are needed, more schools and medical clinics go unbuilt.

Research conducted by the Gaza Industrialists Association shows that 269  projects have been frozen as a result of the shortage of construction materials, and that there are currently only 81 active projects in Gaza – funded either by Qatar or international organizations (in addition to 27 UNRWA projects). These are projects building universities, schools, medical clinics, housing, and water and sewage infrastructure. They are all civilian projects which are much needed by Gaza’s residents.

No modern society can function properly without construction materials. New housing units, schools and infrastructure are always needed. “When we realized that the concrete that’s transferred there, or the cement, or other construction materials, are ultimately used as a means to attack us – I also stopped, in a decision, the transfer of cement and other construction materials”, Defense Minister Moshe Ya’alon said in November 2013. “That’s the price that, unfortunately, the population will have to pay for this thing, but it is also a response to it”.

Since then, the population has paid the price and continues to do so every day. How long will this go on? Ya’alon didn’t say. He also hasn’t detailed the conditions under which restrictions on the entry of construction materials would be lifted. “Calm would be met with calm” (Hebrew), he said this week. How are Gaza residents expected to live without construction materials, without work, without schools or basic sewage treatment facilities? The Ministry of Defense has been silent on this. It’s been eight months, and the ministry is yet to suggest a strategy which addresses Israel’s security without infringing on the basic humanitarian needs of Gaza’s 1.7 million residents.