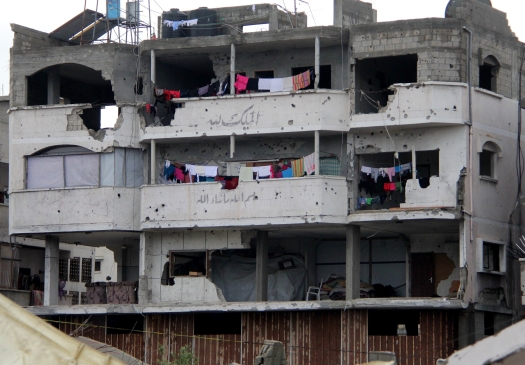 Light years away from the reconstruction many had hoped for. Photo: Gisha

A year has passed since the first shot of Operation Protective Edge was fired, and the Gaza Strip remains in ruins, light years away from the reconstruction many had hoped for. Despite the growing recognition amongst the Israeli security establishment that Gaza’s rehabilitation is a precondition to regional stability and security, Israel continues to impose sweeping, arbitrary restrictions on travel and on movement of commercial goods. Today, access remains the exception, rather than the rule.

Gaza’s unemployment rate remains higher than 40%, and almost 60% among young people; no significant rebuilding is taking place and civilian infrastructure has not even been restored to its state prior to the operation. Poverty and aid dependence are rampant. The damage left behind by the fighting was massive: more than 17,000 housing units were completely destroyed or are no longer habitable; tens of thousands of residential buildings were badly damaged, and scores of schools, hospitals, factories and public buildings were also hit.

Soon after the end of the operation, senior Israeli officials shifted their rhetoric about Gaza’s residents and their needs. Prime Minister Binyamin Netanyahu (Hebrew), former Chief of Staff Benny Gantz, current Chief of Staff Gadi Eizenkot (Hebrew),  and the Coordinator of Government Activities in the Territories (COGAT), Major General Yoav Mordechai (Hebrew) are amongst those who have recognized that Gaza’s reconstruction is in Israel’s interest, and made public statements stressing that giving Gaza residents a financial horizon would contribute to regional stability and may prevent another conflict in the near future.

Since the fighting ended, Israel’s defense minister has restricted civilian movement into and out of Gaza in response to rocket fire by militants on four occasions illegally punishing civilians for acts for which they are not responsible and over which they have no control.

Israel has a legal and moral obligation to help Gaza residents recover and lead normal lives, which now seem entirely out of reach. Top officials say it is in Israel’s own interest to do so. What better time than now?