Rozan Al Khazendar, a 34-year-old designer and entrepreneur from the Gaza Strip, is fighting to realize her creative vision and grow her business, despite the impact of the closure enforced by Israel. 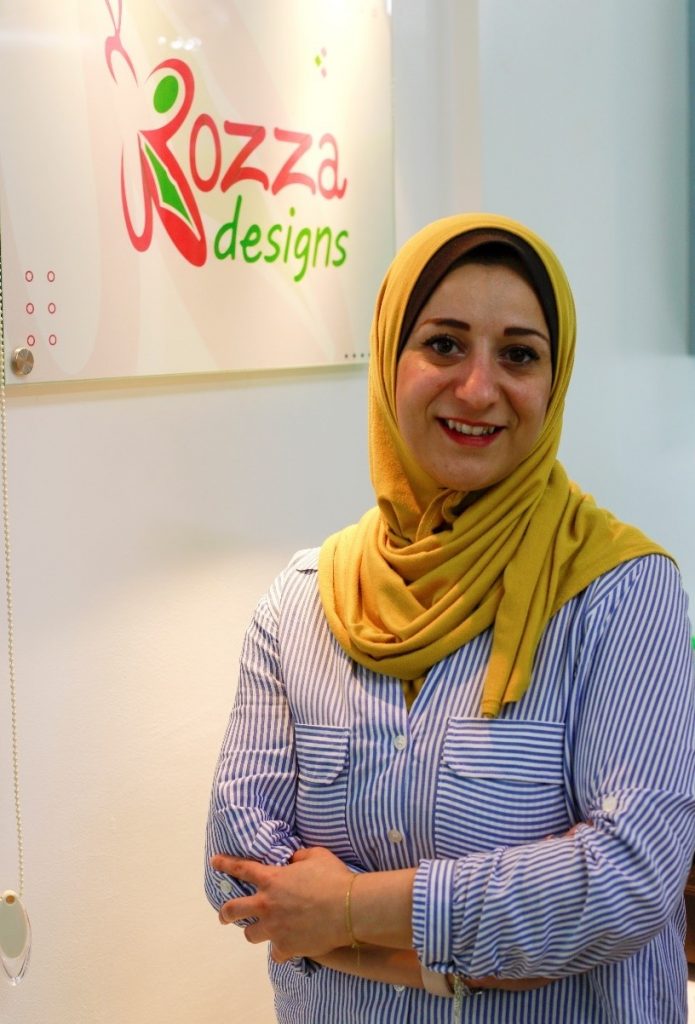 As a woman who grew up in Gaza, in the shadow of Israel’s closure on the Strip, Rozan Al Khazendar learned the importance of not losing hope at a young age. In a conversation with a Gisha staff member, the young, energetic woman shares her personal story, hoping to give other young adults in Gaza and around the world a glimpse into the difficulties she faces as a businesswoman, and a mother of two, living and working in the Strip.

Al Khazendar finished her academic studies in Egypt and a few years later, returned home to Gaza. “I went back to the place I love,” she says. “Life in Gaza is difficult, especially with the closure, but nothing can take away from my love for the place where I was born. This place and the people here are my inspiration and motivation.”

Al Khazendar has a degree in programming, but discovered early on that her real passion is design. She began studying design independently, starting her career in business with designing and printing images and logos on T-shirts and mugs. Slowly, she expanded her skill set and began designing women’s purses and other accessories. “I turned my bedroom in my parents’ house into an office,” she says. “Once I had saved up a little, and with my father’s help, I purchased a special printer to use for my designs. My room became a tiny factory. I took such joy in being surrounded by my own creations.” 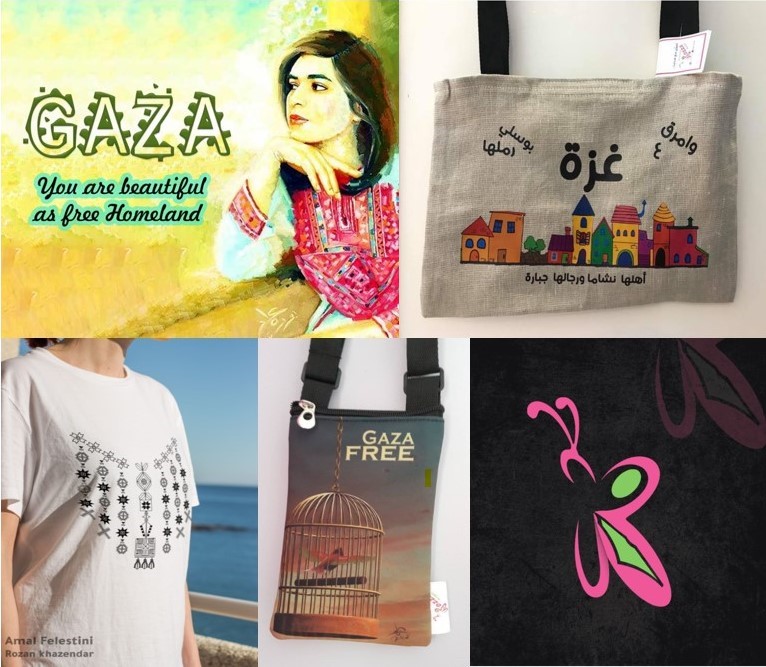 A selection of Al Khazendar’s designs.

Al Khazendar quickly realized she wanted to design products that could “impact social perspectives and make a real change.” In 2014, when international media was flooded with the tragic images of the destruction left by “Operation Protective Edge,” she started the “Gaza is Beautiful” project, designing hundreds of posters highlighting Gaza’s beauty. “Our reality after the war was unbearable,” she recalls. “Life revolved around death and destruction. My project tried to show another side of Gaza – life. The side of Gaza that manages, against all odds, to survive, to rise from the ashes.”

She opened a website to showcase her project and sell her designs on posters, shirts, purses and key chains. A leading hotel in Gaza put her work on display and offered her products for sale. The exhibition was a success. Her message resonated with many, and people came to the hotel to buy her designs. The dire living conditions in Gaza, the scarcity of jobs, and the soaring unemployment rate motivated Al Khazendar to try selling her products outside the Strip. She knew it would be next to impossible, given the many restrictions imposed by Israel on the movement of people and goods to and from Gaza.

Despite the demand, the marketing her products in the West Bank was blocked. Israel’s policy makes it very difficult to ship small volumes of goods out of Gaza through Kerem Shalom, Gaza’s sole commercial crossing. Israel prevents the shipping of goods from Gaza by mail almost entirely, and restricts the use of mail for non-commercial purposes as well. This policy effectively prevents Al Khazendar, and others like her working in medium and small businesses where women have more chances of finding work, from marketing goods outside Gaza. “It felt like all the financial, physical, and emotional effort I’d put into the business had been in vain,” says Al Khazendar. “I lost hope. How much can I sell in Gaza? How much can you earn, how far can you grow? I need to build new business connections, but I’m not even given a chance. To this day, Israel has not permitted me to market and sell my products outside Gaza.” 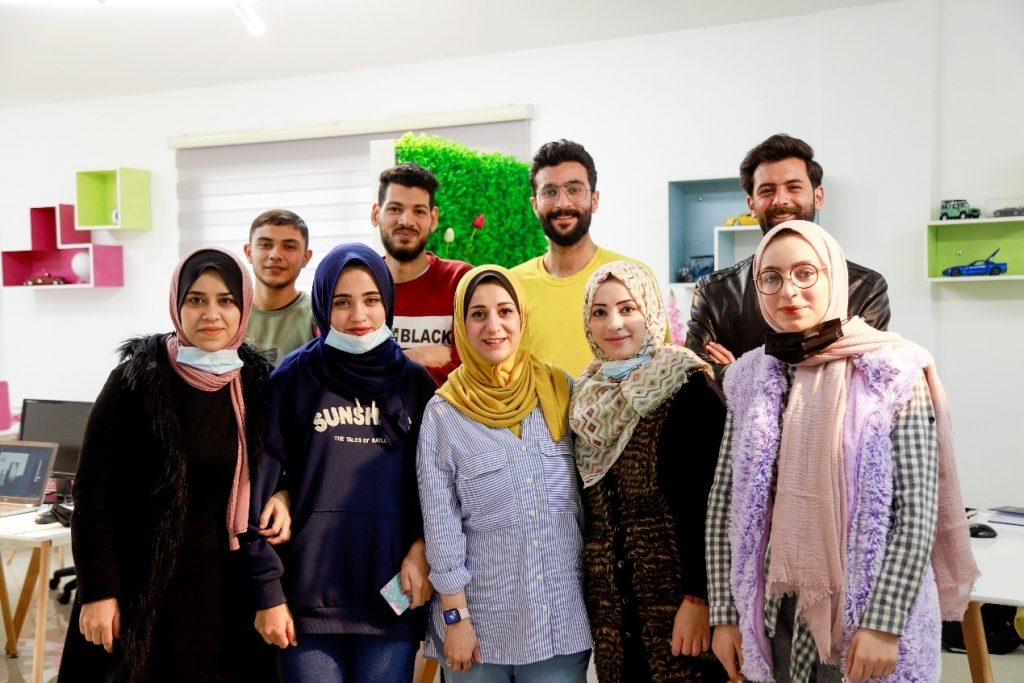 Rozan and the “Rosa” team in their office in Gaza City. Photo by Asmaa Elkhaldi

Over the years, Al Khazendar has submitted multiple applications for a travel permit to conduct business outside the Strip. Every one of the applications she filed was denied by Israeli authorities on the grounds that it “failed to meet criteria.” It was not until the American Embassy in Israel filed a special application on her behalf that Al Khazendar received a single-use permit to travel to Jordan and participate in events hosted by the embassy.

According to Israel’s permit regime, the only people entitled to file an application for work purposes are “traders.” Israel requires an applicant for a “trader” permit to be a “senior merchant whose entry stands to contribute to improving the Gaza Strip’s economy, and who trades in goods permitted under the civilian policy in place at the time the application is made.” Israel will only process the application if the applicant proves their business cycle exceeds 20,000 ILS per year and that they employ at least five people.

“For years, Israel has been refusing to let me out to develop my business,” Al Khazendar says, clarifying, “and I’m certainly not the only one in this position.” Figures provided by Israel to Gisha in response to a Freedom of Information requests revealed that over the course of three years (2017-2019), more applications filed by women were refused on the grounds of “failure to meet criteria” than those filed by men. According to the Palestinian Civil Affairs Committee in Gaza, in 2019, out of 151 applications made by women for permits to exit the Gaza Strip to attend professional courses, conferences and training sessions, only 23 were approved. In 2018, women filed 618 applications for exit permits to attend training sessions, courses and conferences. Only 22 were approved.

Though men are also harmed by Israel’s stringent permit regime, one of the consequences of Israel’s narrow criteria is that women have an even lower chance of finding employment in the Strip. A high percentage of university graduates in Gaza cannot find work in their field. In the third quarter of 2020, unemployment among women aged 29 and younger was 88.4%. To help women who have difficulties entering Gaza’s job market, Al Khazendar started the “Rose from Every Garden” project, aiming to empower women in Gaza and support their professional development. In the early months, she covered the costs of the project out of pocket, but she is now working on fundraising in order to be able to help more women. “So far we’ve held workshops for dozens of women in Gaza, and six of them already started their own business,” she says proudly. “It’s very powerful that we are women who manage to help each other. It’s important to me that not a single woman is left without work.” 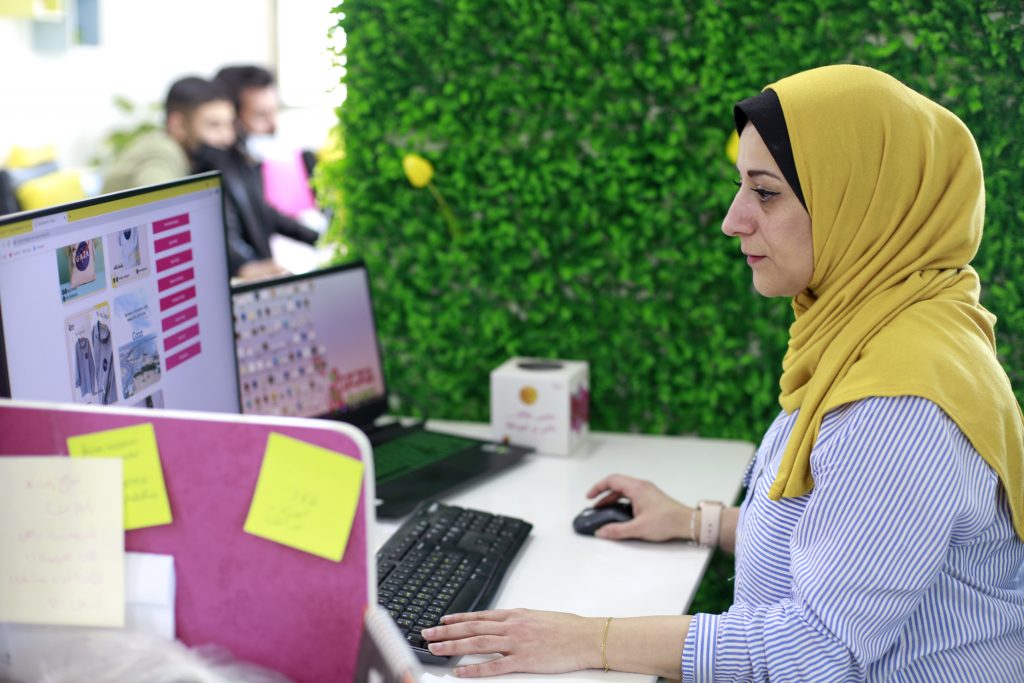 Working at the office. Photo by Asmaa Elkhaldi

In 2020, Al Khazendar founded Rosa, a graphic design company that now employs eight people. The company operates until the early afternoon, and after that, the office stays open for employees to use the space and equipment to develop their own projects and skills. “There’s a multitude of creative people in Gaza. They are talented. All they need is the space, and that’s what I’m doing,” she says.

Al Khazendar is now working on a new project, “Butterflies of Palestine,” a virtual, creative space for Palestinian women working in design. “My dream is a virtual space where Palestinian women from different geographical locations can come together,” she explains. Israel’s policies separate Palestinians living in Gaza, Israel, the West Bank, and abroad, breaking apart families and weakening social, business and cultural ties. “Virtual space can bridge the gap created by the restrictions, at least until we can travel and meet again. That’s what the butterflies symbolize.”