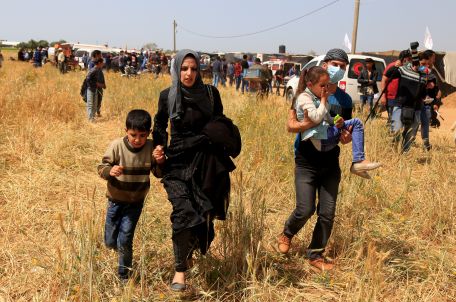 April 12, 2018. The fatal shooting of protestors near the fence separating Israel and the Gaza Strip over the last few weeks has rightfully elicited harsh reactions from around the globe. Israeli politicians and officials meanwhile depict recent events as a sudden threat on Israel’s borders, initiated by Hamas. By doing so, they willfully obscure the wider context of Israel’s enduring relationship with residents of the Gaza Strip: 50 years of control, culminating in a closure tightened more than a decade ago. The current wave of protest cannot be understood detached from this context or from the 70-plus year regional conflict and its many complexities, nor can it be solved using military force.

Regardless of the political affiliation of the protestors, who organized the protest, or the agenda they wish to promote, international law prohibits the use of lethal force against civilians unless they participate directly in acts of hostility or pose a concrete risk to life, and even then, only as a last resort and only to the extent necessary to alleviate the risk. Participation in a demonstration, even if the protest is not entirely “peaceful” and includes riots or disturbances, does not constitute an act of hostility or direct endangerment of life, in and of itself, that can be responded to with live fire. There is no doubt that the great number of injuries and loss of life near the fence could have been avoided had the rules of engagement been dictated by international law rather than a desire to quash protest.

For more than 10 years, residents of Gaza have lived under excessively harsh restrictions on movement, made possible by Israel’s closure of the Strip’s land, sea and air space. The restrictions have harmed the functioning of civilian infrastructure and the delivery of essential services such as the regular supply of potable water and electricity, and sewage treatment. A daily reality unbearable by any reasonable standards has been compounded by the impact of three devastating military operations.

Israel imposes a highly restrictive permit regime on Gaza residents. Israel decides who and what enters and exits Gaza, and when. Israel has also deliberately deepened the divide between the two parts of the Palestinian territory, in an effort to isolate the Strip and induce its status as a distinct entity. The results are a distorted economy, families torn apart, deficient medical services, and blocked potential. The rift between the Palestinian factions and the sanctions imposed by both these parties exacerbate the dire situation, as does the prolonged closure of the Rafah border crossing by Egypt, which intensifies the hardships caused by the Israeli-imposed closure. Gaza residents have hovered on the brink of humanitarian disaster for too long, mired in a reality that offers little hope for the future. The protests on the border are in part intended to call the world’s attention to this bleak reality, and compel a solution.

A comprehensive, sustainable solution to the situation can only be reached by ending the occupation. In the meantime, there is no justification for the suffocating permit regime and arbitrary, sweeping restrictions on movement imposed on the Strip. Gaza’s predominantly young population is educated, ambitious, and brimming with potential. The demonization of the two million residents of the Strip as a whole, and their portrayal as terrorists is a maddening act of incitement, a desperate attempt to conceal the failure of Israel’s policy on Gaza, behind which there is no long-term strategy.

The deterioration of living conditions in Gaza is the calculated consequence of a deliberate policy. The ever-widening disparity between the needs of the civilian population in the Strip and the resources at their disposal is neither the result of divine decree nor a natural disaster. Despite the many measures that could be taken to alleviate the situation, steps keep being taken to make matters worse:

Read the document in PDF