In the early part of the year 2000, before the start of the Second Intifada, twenty-six thousand laborers from Gaza clocked about half a million exits at Erez Crossing, between Gaza and Israel, each month. In September 2000, when the Second Intifada began, Israel drastically reduced the number of permits issued to Palestinian laborers across the occupied territory in general and frequently blocked those with permits from entering its territory, including shutting down Erez Crossing numerous times and sometimes for extended stretches over the following years.

In March 2006, following Israel’s implementation of the Disengagement Plan and about two months after Hamas won a majority of seats in elections for the Palestinian Legislative Council, Israel imposed a closure at Erez Crossing for the Jewish holiday of Purim. When the holiday ended, it blocked entry by laborers into its territory and did not allow them in again until late 2014. After more than eight years of a sweeping prohibition on access for Gaza workers, Israel began allowing a limited number of laborers from Gaza to enter Israel, unofficially, under a quota for “trader permits”, which it expanded slightly after the 2014 war.

In late 2021, a few months after the hostilities of May 2021, as Israel began gradually lifting the “coronavirus closure“ it had enforced at Erez Crossing since March 2020, the Israeli authorities added a “financial needs” criterion to its travel procedures for Gaza residents, and began openly acknowledging the fact that most individuals in possession of these permits were exiting Gaza to work manual labor jobs in Israel. Despite these expansions, the number of exits from Gaza for work in Israel remains lower than in the past and is far below need.

Decades of occupation and severe movement restrictions, tightened by Israel in 2007 to the point of full closure, as well as repeated military attacks, have all but decimated Gaza’s economy and continue to drive down living conditions in the Strip. In light of the dire economic situation, soaring unemployment rates, and an average monthly wage of just 1,464 ILS (450 USD) even among those few who are employed, Gaza’s economy depends on stable access to livelihoods outside the Strip.

This policy brief provides both background on movement of workers between Gaza and Israel, and an update on and analysis of the impact of Israel’s current policy on this issue. It is based, in part, on a series of in-depth interviews conducted by Gisha with workers from Gaza who make a living in Israel, as well as our ongoing monitoring of travel via Erez Crossing.

In 1991, towards the end of the First Intifada and the Gulf War, Israel revoked the “general exit permit” that had allowed Palestinians to move relatively freely until that time, and began requiring Palestinians to obtain individual permits for travel between the West Bank, the Gaza Strip, and Israel. When the Second Intifada broke out in late 2000, Israel significantly reduced the number of permits for Palestinian laborers. In 2004, the Israeli government passed the “Amended Disengagement Plan” resolution (Hebrew), which states, among other things, that “the State of Israel aims to reduce the number of Palestinian workers entering the State of Israel to the point of eradication.” As noted above, in March 2006, Israel closed Erez Crossing for the Purim holiday and blocked entry of Gaza workers into its territory thereafter.

After the war on Gaza in the summer of 2014, senior Israeli officials declared that Gaza’s reconstruction and economic recovery served Israel’s interest for stability; at the recommendation of Israeli security officials, an arbitrary quota of “trader permits” was allocated to Gaza residents, which was eventually expanded to 5,000 permits. This measure was ostensibly intended to enable traders and businesspeople from Gaza to travel to Israel and the West Bank to conduct business and jumpstart Gaza’s economy, but it fell far short of meeting Gaza’s actual needs. In 2019, media reports emerged indicating that many, even most, trader permits were being used by their holders to access day labor in Israel, though in reality the trend had started in 2014.

In late 2021, Israeli authorities introduced “financial needs” permits to Israel’s criteria for exit from Gaza. In March 2022, the Israeli government passed resolution 1328 (Hebrew) to expand the “financial needs” permit quota to 20,050; 12,000 permits for the construction sector, 8,000 for agriculture and an additional 50 permits for individuals working at the crossings between Gaza and Israel. As of publication, the quota remains unfilled. The number of valid “financial needs” permits as of August 28, 2022, was 11,501. In July 2022, 35,319 exits from Gaza for work purposes were recorded at Erez Crossing. This figure includes actual traders as well as laborers and is the highest number of exits recorded since the closure was imposed, yet still represents only 7% of the monthly number of laborers’ exits in 2000, before the Second Intifada.

To submit an application for a “financial needs” permit, a resident of the Strip must first register with the Ministry of Labor (MoL) in Gaza, according to the following criteria: the individual must be married, aged 26-60, unemployed or without a stable source of income, and have not been employed as a civil servant in the government in Gaza or by the Palestinian Authority. The Ministry of Labor forwards the applications to the Palestinian Civil Affairs Committee (PCAC) in Gaza, a Palestinian Authority-affiliated body that channels permit applications by Gaza residents to the Israeli authorities.

By the end of July 2022, more than 100,000 Palestinians in Gaza had registered with the MoL for “financial needs” permits, indicating soaring need for access to livelihoods. Yet even those lucky few whose permit applications have already been transferred to the Israeli authorities face an uncertain future. Israeli authorities sometimes cancel people’s permits at Erez Crossing even after their applications were approved, and frequently impose arbitrary “security blocks” on applicants. PCAC figures show that between September 2021 and August 2022, Israel imposed approximately 17,700 “security bans” and “crossing bans” on Gaza residents who had applied for permits to exit the Strip for work in Israel. It is apparent, based on cases handled by Gisha, that Israeli authorities see no issue with revoking permits or denying permit applications based on broad considerations that do not necessarily relate directly to the applicant.

On July 15, 2022, the Coordinator of Government Activities in the Territories (COGAT) announced (Arabic) that starting August 1, 2022, Gaza residents will be able to receive work permits (rather than “financial needs” permits, which are not official work permits), and benefits, including employer contributions to health insurance and pension. According to COGAT’s announcement, “financial needs” permits would not be renewed once they expire, and in order to continue working in Israel with a work permit, workers must find employers in Israel to submit a permit request on their behalf to Israel’s Population and Immigration Authority. Workers who are unable to find an employer to request a work permit on their behalf will no longer be able to exit and work in Israel.

In practice, as of time of publication, Israel is still renewing “financial needs” permits for Gaza workers, yet this announcement (also noted in the March 2022 government resolution (Hebrew)), changes the application process, bypassing the Palestinian intra-age mechanism described above. Gisha is aware of instances in August 2022 where local authorities in Gaza blocked several residents who had received work permits from Israel (but had not held “financial needs” permits previously) from exiting the Strip. It appears that talks are underway to resolve the issue.

From Israel’s perspective, Gaza residents have no vested right to enter Israel or work in its territory. Nonetheless, Israel’s Wage Protection Law and collective agreements stipulate that all individuals working in Israel, whether they are citizens, foreign nationals or Palestinians, with or without status and regardless of whether they have a valid work permit, should have access to the same protections enshrined in labor law and receive pay (with deductions for income tax and national insurance payments).

Yet, given a lack of consistent enforcement against labor violations, Israeli employers interpret and carry out the terms of employment as they see fit. This is true for Palestinian workers from Gaza as well as from the West Bank (with or without a work permit). By failing to enforce labor laws, the state leaves Palestinians working in Israel exposed to violations of their labor rights and with little recourse if their employers withhold their wage, refuse payment in case of a work accident, and so on.

The new policy, as announced by COGAT, as well as the mechanism currently in place for “financial needs” permits, give rise to several crucial issues which the state of Israel must address without delay, including the following:

In 2021, COGAT launched the “Al Munaseq” mobile application (app), ostensibly intended to enable Palestinians from Gaza and the West Bank to file permit applications. In discussions (Hebrew) held by the Knesset Foreign Workers’ Committee in 2021 and 2022, COGAT noted that it plans to use the app as a platform for connecting Israeli employers to Palestinian employees, with the aim of reducing the “black market” trade in permits through brokers. As of today, Gaza residents can use the app to check the status of their permit applications but cannot submit applications through it and the platform for identifying employers is also not functional. The app’s terms of use severely violate users’ rights to privacy and dignity, in breach of both Israeli and international law; and create conditions that force Palestinians to provide information that may be used by the occupying power, putting themselves and those close to them at risk. These arguments were presented in a petition filed by HaMoked: Center for the Defence of the Individual, which was rejected by Israel’s High Court in May 2020.

>> To read “A Day in the Life of a Worker from Gaza in Israel,” click here.

[1] In February 2022, the Bank of Israel released (Hebrew) a draft protocol on “Payment of Wages to Palestinians via Bank Transfers,” stating it is designed to “end cash payments to Palestinian laborers.” The protocol, approved (Arabic) in April 2022, only applies to West Bank workers. Given the restrictions on bank transfers to Gaza under the Counter Terrorism Law (Hebrew), Gaza laborers are currently excluded from the protocol. 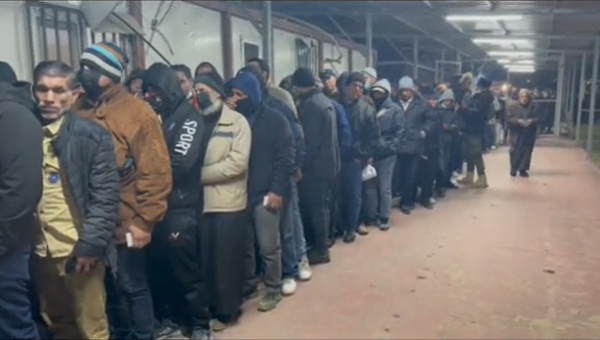