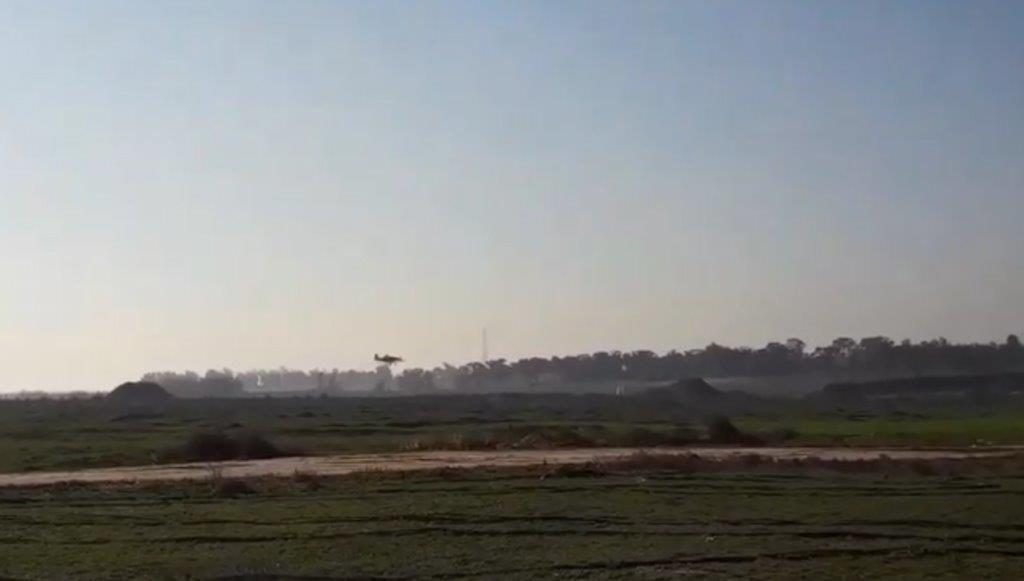 Aerial spraying in January 2020. Footage by farmers in Gaza

April 6, 2020. At 8:30 yesterday morning, Israeli crop duster planes were seen conducting aerial spraying of herbicides along the fence separating Gaza from Israel, in the area east of the Gaza District. Farmers working in agricultural lands near the fence told Gisha that they fear the strong winds in the area yesterday carried the herbicidal agents as far as one kilometer into the Strip, potentially damaging large areas of farmland in Gaza.

The last time Israel conducted aerial herbicide spraying along Gaza’s perimeter fence was between January 14 and 16 this year. At the time, farmers reported that many dunams of parsley, peas, wheat and barley, stretching up to 600 meters into the Gaza Strip, sustained heavy damage. This time, as always, farmers were given no advance warning of the spraying and, therefore, could not prepare to protect their crops.

In response to Freedom of Information requests by Gisha, Israel has previously admitted to having conducted aerial spraying over Israeli territory near the perimeter fence almost 30 times between 2014 and 2018. The army has stated that the spraying is conducted in order to expose the terrain “to enable optimal and continuous security operations.” No incidents of spraying were recorded in 2019. It is estimated that aerial herbicide spraying by Israel has affected a total area of 7,620 dunams (almost 1,900 acres) of arable land in the Strip.

In July 2019, Forensic Architecture published a multi-media investigation into the practice, based in large part on research and legal work by human rights organizations Gisha, Adalah, and Al Mezan. The report strengthened the organizations’ findings whereby aerial herbicide spraying by Israel has damaged lands deep inside Gaza.

Aerial herbicide spraying conducted by Israel causes severe damage to crops and livestock, resulting in immense losses for residents. Farmers have no choice but to go back to cultivating their land in the hopes that Israel chooses not to destroy months of hard work in one fell swoop.

For years, human rights organizations Gisha, Adalah and Al Mezan have demanded that Israel end the destructive practice, which constitutes a human rights violation and a breach of both Israeli and international law.

Yesterday, the three organizations sent an urgent letter (Hebrew) to Israel’s minister of defense, the military advocate general and the state attorney, demanding that Israel put an immediate stop to the aerial spraying, particularly in light of the coronavirus crisis and the acute need to preserve food security and what little is left of economic activity in the Strip at this time.