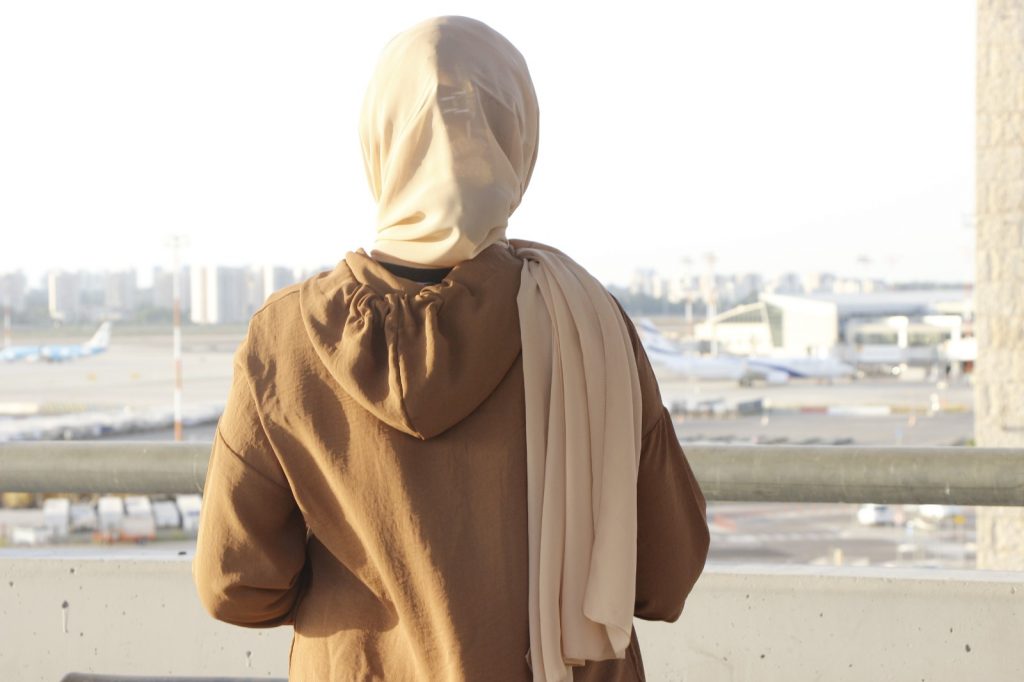 Alaa at Ben Gurion Airport, on her way back to the US.

Last week, Alaa, a young Palestinian woman and resident of the United States, exited the Gaza Strip on her way back to the US, concluding an eight-month-long wait for an exit permit. For eight months, Alaa was separated from her family and university studies, not knowing if or when she would be allowed back home.

Alaa traveled to the Strip from the US  with her mother and four younger siblings to visit their extended family. In October, the family submitted permit applications to return to the US via Erez Crossing. Alaa’s mother and younger siblings were granted permits and they exited the Strip, flying to the US from Jordan after crossing via Allenby Bridge, which is the only way Israel allows Palestinians to travel abroad.

During the five months that followed, Alaa submitted request after request for a permit, four in total. The first received no response from the Israeli authorities. The second was answered laconically with a request that Alaa provide a “new phone number.” Before submitting the third application, Alaa purchased a new SIM card from the Palestinian communications company Jawwal, so as to meet Israel’s demand for a new number, though she had already provided her own number in her previous applications, registered under a competing company, Ooredoo Palestine. This didn’t help either. Israel persisted in its demand that Alaa supply a “new phone number.”

Alaa’s fourth permit application, filed in late January 2020, included a letter from Ooredoo confirming that the number she had provided really was her own. But again, instead of an answer, all Alaa received in response was the same, inexplicable demand to provide a new number. In February, Gisha contacted the Israeli authorities on Alaa’s behalf. Their response stated that “a valid phone number is required to process the application.”

It was only following a petition to the court Gisha submitted, to demand that Alaa be allowed to exit Gaza and fly home via Jordan, four months after she first applied for a permit, that Israel agreed to process her application and grant her a permit. By the time Israel’s approval was given, it was already too late. The day Alaa was supposed to exit Gaza, March 8, Israel tightened movement restrictions at Erez Crossing due to the Jewish holiday of Purim. After the holiday, restrictions at Erez were extended to curb the spread of the coronavirus pandemic, remaining in place to this day.

In April, Israeli Member of Knesset Tamar Zandberg wrote to the Defense Ministry to request that Alaa be permitted to fly home via Ben Gurion Airport. At the same time, Gisha asked the court to issue a costs order in Alaa’s favor. The state admitted that there had been an “error” in the processing of Alaa’s application, but claimed that the handling of her case was “prompt and effective, despite the heavy load placed on the respondents’ shoulders.” In his decision, the judge stated that Gisha’s petition on Alaa’s behalf had been justified, and imposed a 5,000 ILS costs order on the state.

Last week, Alaa was informed that Israel would grant her a permit, exceptionally, to fly home via Ben Gurion Airport, without further demands. On Thursday night, she flew back to the US, concluding eight months of needless anguish and uncertainty caused by the bureaucratic violence inherent to Israel’s permit regime.