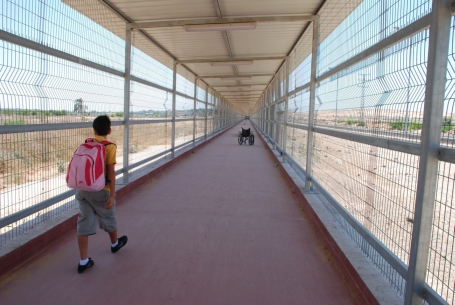 August 27, 2014. Palestinian sources informed Gisha that Erez Crossing operated today as it had prior to June 15, just a few days after the kidnapping and murder of three young Israelis in the West Bank. Israel allowed transit of medical patients and their companions, foreign citizens, other humanitarian cases and merchants holding valid permits. Israel also allowed mail to be transferred to the Strip as well as newspapers.

Kerem Shalom Crossing operated as it did on most days of the military operation, for the entrance of goods and fuel. It is unclear when and if constructions materials will be allowed to enter or when export will be allowed. Yesterday the crossing operated in the morning but was closed due to projectile fire in the area of the crossing. Before it closed, 78 truckloads of goods entered Gaza, as did 13 truckloads of fuel and cooking gas.

Despite the fact that Rafah Crossing was heavily damaged by Israeli airstrikes early Monday, the Palestinian Crossings Authority notified that the crossing would continue to operate. On Monday, 110 individuals transited from Gaza to Egypt. The crossing also opened yesterday, however it was quickly closed upon the discovery of unexploded ordnance in the area.

Power cuts in Gaza are still running at about 16 hours per day. One high tension line carrying electricity purchased from Israel is still down. Cuts in Gaza City are particularly long as a result. The line normally supplies 12 MW to the Gaza City area, which is about a third of its total supply. According to the Gaza Electricity Distribution Corporation (GEDCo), the damage to the line is on Israel’s side.

The power plant remains shut down, following bombardments which took place on July 29. The plant had produced around 60 MW of electricity prior to the start of the military operation. Even with all the lines operational from Israel, without the supply from the plant, cuts stand at around 15 hours per day – six hours on, twelve off.

The electricity network inside cities was also damaged during the hostilities as were warehouses storing spare parts belonging to GEDCo. As a result, spare parts are in short supply. Certain areas of the Strip continue to be completely without power because of massive damage to homes and infrastructure.

Yesterday afternoon, two utility workers from GEDCo were killed while on duty and trying to reach the Beit Lahiya area to make repairs.

Sunday marked the start of the school year in the Palestinian school system, however classes in Gaza did not begin. Hundreds of thousands of people are still taking shelter in United Nations and government schools. As of yesterday, about 290,000 people were taking shelter in 85 UNRWA schools, or about 60% of all estimated displaced persons. This is about 3,400 people per school, or six times the normal occupancy rate. During the hostilities, it’s estimated that approximately 17,200 housing units, housing more than 100,000 people, were severely damaged or completely destroyed, though assessments are ongoing.