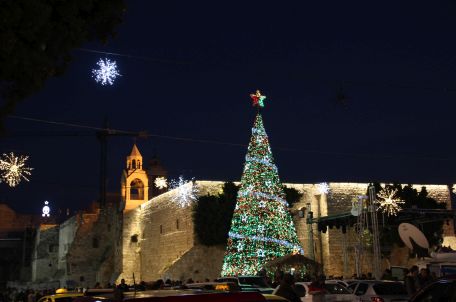 Christmas in Bethlehem, 2016. Photo by Fjmustak

December 16, 2019. Yesterday morning, following media coverage and public criticism over Israel’s decision not to allocate permits for travel between Gaza and the West Bank this Christmas, the Coordination of Government Activities in the Territories (COGAT) announced it would issue 500 travel permits to Christian residents of the Gaza Strip to visit family and holy sites in the West Bank and East Jerusalem over Christmas. A mere hour or so later, COGAT took down the update on the 500-permit quota and its latest version of the “Status of Authorizations,” where the quota had appeared earlier that morning. COGAT has not clarified its position since then. Journalists who requested comments from COGAT were told that the addition of the quota had been posted as a result of a “human error” but also that no additional quota had ever been posted.

Yesterday Gisha wrote a letter (Hebrew) to the assistant to the Minister of Defense, demanding that the ministry publish its decision on this matter immediately.

Last week, less than two weeks before Christmas, COGAT published an update to the “Status of Authorizations,” the document listing all criteria set by Israel for movement of Palestinians between Gaza, Israel, the West Bank, and abroad; the update included permit quotas – what Israel often calls “holiday gestures” – for Palestinian Christians in Gaza and the West Bank. According to the updated Status, Israel would allocate a quota of no more than 100 permits for Christians from the Gaza Strip over the age of 45, but only for travel abroad; in other words, Israel had decided to ban travel between Gaza to the West Bank over Christmas. The decision garnered exstensive media attention. Over the weekend, an update was posted on COGAT‘s English website, stating that Israel would allocate “approximately 500 permits for Christians from the Gaza Strip to travel to East Jerusalem and the West Bank.” COGAT also updated the “Status of Authorizations” document (Hebrew, on p. 23) to reflect the addition of the quota. Hours later, both the update to COGAT’s website and the updated Status were removed from COGAT’s website without explanation.

COGAT’s conduct is a reflection not only of Israel’s disregard for the rights of Palestinians living under its control, but also of Israel’s misleading use of “security reasons” to justify denying outright their movement. COGAT’s sudden change to the arbitrary quotas it had initially allocated for travel over Christmas, and its withdrawal of the quota only hours later, point to the arbitrary and unpredictable nature of Israel’s decision making process. They also emphasize that security has nothing to do with Israel’s systematic limitations on Palestinian’s ability to travel.

Israel’s decision to not allocate any permits for Christians to travel between Gaza and the West Bank points to the intensification of access restrictions between the two parts of the Palestinian territory as part of Israel’s “separation policy,” ultimately aimed at serving Israel’s annexationist goals in the West Bank.