Almost a year after our first conversation, Gisha checked back in with Abdallah Abu Halima, a Palestinian resident of Gaza whose one-of-a-kind hydroponic farming project was badly damaged in Israeli bombings in May 2021. Abu Halima, a 35-year-old married father of three, holds a degree in geographic information systems from Al-Azhar University. He founded the hydroponics project in 2019 to provide solutions for the challenges faced by farmers in the Strip. The special hydroponic greenhouse he built maximizes land use and reduces water consumption. On May 19, 2021, the greenhouse was hit during air and artillery strikes by Israel. Entire crops were destroyed and the structure and equipment inside it were damaged. The Ministry of Agriculture in Gaza assessed the losses at around 70,000 USD.

When we spoke to Abu Halima a year ago, he expressed fear that, like residents whose fields and businesses were damaged in the 2014 war, it would be very difficult to find funding to rebuild his business. “Back then [in 2014], the focus was on housing, which is certainly important, but entrepreneurs and farmers received no compensation,” he said. A year later, Abu Halima’s fears have, sadly, materialized. For months after the attack, he filed applications for funding from several international and local organizations. None came through. At a time when families are still waiting to be able to rebuild their homes, other matters are pushed aside.

Abu Halima realized he had no choice but to try to adapt to the new reality. He decided to build ordinary greenhouses on his plot, hoping he would at least be able to make ends meet, but he was in too much debt. 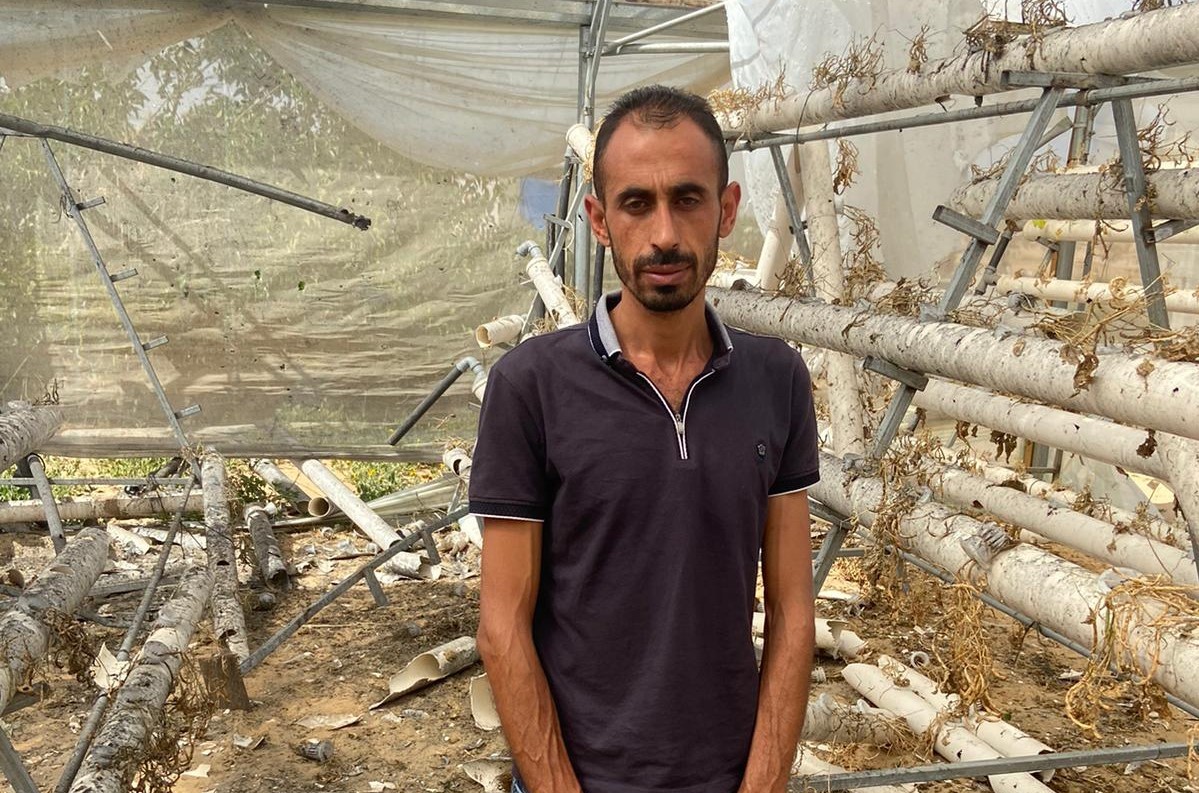 “This has been the hardest time of my life,” he tells us. “There is no income, no horizon, no political or financial stability. Every attempt comes up against the lack of funding.” Decimated by 15 years of closure enforced by Israel, Gaza’s job market left Abu Halima with few ways forward. “I had three options: I could try emigrating from Gaza and going to Turkey to look for work; I could stay in Gaza and end up in prison because of debt I can’t repay; or I could apply for a work permit in Israel,” says Abu Halima.

In early 2022, Abu Halima received a “financial needs” permit to enter Israel for work. Now he works as a laborer doing house renovations in Israel. “I’ve started paying back my debts, at least. There is always a chance that Israel will close the crossing due to the security situation, but I have no alternative in the Strip.”

Over the years, as well as placing insurmountable obstacles to entrepreneurship and business development in Gaza, Israel has also deliberately harmed the Palestinian economy and subjected it to Israeli interests. The few permits for “trade” and “financial needs” that Israel allocates for Gaza residents are not nearly enough to sustain the hundreds of thousands of unemployed individuals in the Strip, and even for the few who receive them, the permits are only valid for up to six months. Moreover, relying on permits means even greater dependency on decisions made by Israel: Will Israel shut down Erez Crossing again as a punitive measure and deny thousands of people access to their jobs? Will it decide to cancel the meager permit quota for Gaza residents as a means of applying pressure?

Once a successful business owner and entrepreneur leading a unique farming initiative that employed 11 other people, Abu Halima became unemployed, and then a laborer, at risk of exploitation and at Israel’s mercy. Like him, many small business owners in Gaza continue to grapple with the ongoing impact of last year’s offensive.

With a business degree from the Islamic University in Gaza and several medals from international cooking competitions under her belt, in 2020, Saja Abu Shaaban opened her own restaurant. She named it Beitna, ‘our house’ in Arabic. By May 2021, Beitna employed seven women. Abu Shaaban speaks with pride about how professionally the business was run and recalls working around the clock to make it a success. Before the May 2021 attack, her staff even entered regional cooking competitions. 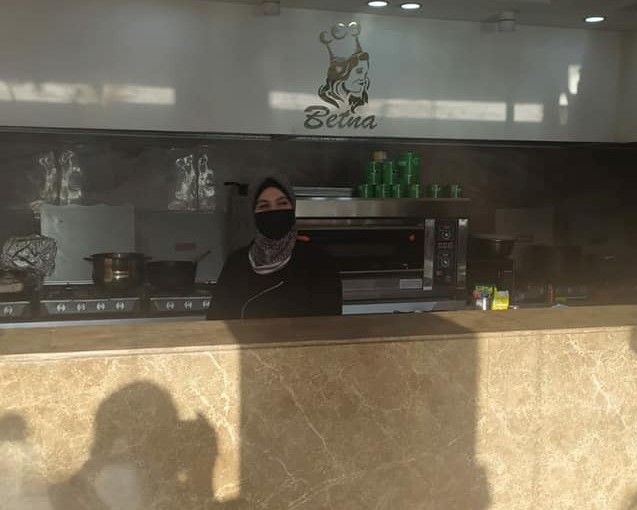 The Beitna restaurant before the May 2021 attack on the Strip. Photo: Courtesy of Beitna

“As a married woman, I felt pride and responsibility at having a source of income of my own; at being self-employed, able to face the difficulties of running a business and to prove to myself and the women working with me that we can make a change.”

On May 12, 2021, Israel bombed the Al Johara high-rise in Gaza city, where Beitna was located. “When I heard that the tower was being bombed, I prayed to God to protect the restaurant, to spare some part of it,” Abu Shaaban told us in the days after the attack. “I stayed up all night, and at dawn, I ran over to the site, despite the danger, to find out everything had been ruined! I collapsed on the floor, crying. Words can’t describe what I felt at the time.”

Abu Shaaban was planning to hire more women and dreamt of opening a second location. When we spoke to her a year after the May 2021 attack, these hopes seemed further away than ever. “We used to make food for people. Today, my staff and I hope someone will provide food for our kids,” she says.

The Ministry of the Economy in Gaza estimated Beitna’s losses at about 60,000 USD. Abu Shaaban has not received compensation, nor was she able to find funding to rebuild her business. “We have been living the same nightmare since that fateful day,” she says. “After the ceasefire, and despite all the destruction, we still held on to our aspirations to rebuild. We had hope of rising again. We told ourselves we may have lost the site and the equipment, but we still had ourselves, that we would be able to return to the way things were. But, unfortunately, the situation is harder than we thought. It’s not easy to get back to work, when you’ve lost everything.” 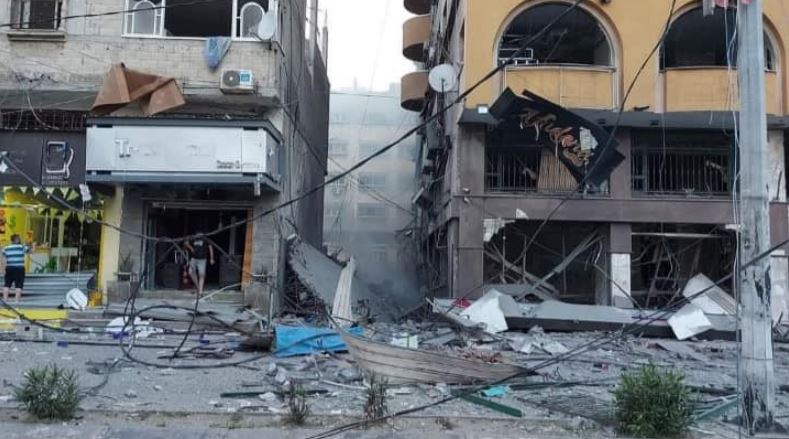 On the right, the Beitna restaurant after the building was bombed. Photo: Courtesy of Beitna

“The truth is I hate being around that area, where the Johara building once stood,” Abu Shaaban told us. “The whole building has been removed. All that’s left is a vacant lot waiting to be reconstructed. It reminds me that behind every wall and inside every room of this tower were people’s stories, dreams that are now gone.”