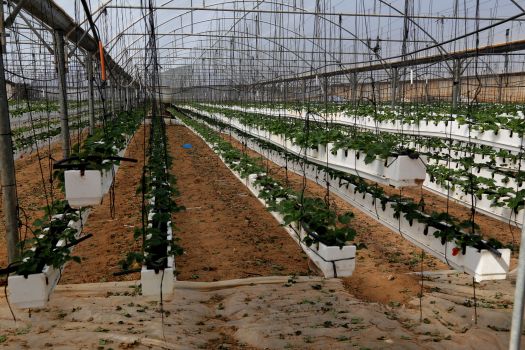 Vertical farming of strawberries in the Gaza strip. Photo by Gisha

In October 2014, in the wake of the destruction left by Operation Protective Edge and for the first time since the closure on Gaza was imposed in June 2007, Israel decided to allow limited sale of produce from Gaza in the West Bank. One of the Gaza crops approved for marketing in the West Bank was strawberries. Agricultural trade has the potential to propel economic activity, create jobs and new business relationships, as well as generate income. Strengthening commerce and industry benefits both the Israeli and Palestinian economies, which are deeply intertwined as it is.

While there is general approval to allow marketing of Gaza strawberries in the West Bank, each year the Israeli Ministry of Agriculture takes it upon itself to issue permission for trade to begin in practice. During the strawberry season of 2015-2016, Israeli authorities initially refused to permit the sale of Gaza strawberries in the West Bank for unknown reasons. It was not until January 2016, once the season was past its peak and after Gisha sent letters to the Ministry of Agriculture and the Coordinator of Government Activities in the Territories (COGAT), that the marketing of strawberries commenced. As would be expected, losses for farmers in Gaza ensued.

By way of contrast, last year, the sale of strawberries in the West Bank was approved and began in early December, resulting in eight times the amount sold (from 94 tons during the previous year to 750 tons).

The date on which marketing of strawberries can begin this year has not yet been announced, increasing uncertainty among farmers and suppliers, who invest money and hundreds of hours of labor in the crops without any guarantee that Israel will allow them to market their produce on time to generate profit or break even. The decision of Israel’s Ministry of Transport to prohibit truck traffic to and from Kerem Shalom Crossing during certain hours of the day, due to go into effect this November, could also impact the volume of strawberry sales during the upcoming season.

Ahmed Shafi is a farmer and the director of an agricultural co-operative in Gaza. He told Gisha that given the scope and success of sales in the West Bank last year, and in the hopes that Israel would permit and expand the quotas permitted for sale in the West Bank and abroad, this year Gaza farmers designated additional farmland to strawberry crops (900 dunams in total (approx. 222 acres), compared with 520 dunams last season). Fifteen dunams were used for vertical growing in greenhouses built last year with the support of USAID. Vertical farming yields more produce per dunam (between eight and ten tons of strawberries, compared with three tons per dunam). Given the acute shortage of space in Gaza, the vertical farming system offers critical farming solutions. Population density and increasing residential construction aren’t the only factors encroaching on Gaza farmland: herbicides sprayed by Israel near the perimeter fence are often carried by wind into the Strip, damaging farmland in the adjacent area. The strawberry harvest is expected to begin in late November this year, and suppliers are preparing to begin marketing outside the Strip as early as December 1.

According to Shafi, two meetings were held in recent months between COGAT officials, the agricultural coordinator at Erez Crossing, the heads of Gaza’s farming associations, economic experts from Gaza, and members of the diplomatic community. One of the issues raised in these meetings was the ban Israel imposes on the sale of Gaza goods in Israel. The heads of Gaza’s four farming associations called for approval for strawberry sales in Israel, noting that Gaza buys tens of millions of shekels worth of goods from Israel, while Israel buys very few types of produce from Gaza, in minor quantities.

Restricted access to markets for Gaza’s produce is one of many challenges faced by farmers and suppliers from the Strip as a result of Israel’s policy. Like all other sectors of economic activity in Gaza, travel permits are crucial for suppliers and the heads of farming associations. The four directors of Gaza’s farming associations do not currently hold permits to exit the Strip, which they need in order to run their business. Travel means purchasing advanced farming and packing equipment, signing contracts with buyers and suppliers, overseeing shipments, collecting payment, and much more. For instance, in order to export strawberries to Europe, directors of the farming associations, or their representatives, must report to the Ministry of Finance in Ramallah and obtain a document confirming their produce meets standards set by the European Union. The director of one of Gaza’s farming associations, Ghasan al Khatib, told Gisha that leading suppliers have been invited to attend a farming expo in the Netherlands on November 4, but have not yet received the permits which would allow them to do so. Attending the expo is crucial for expanding sales abroad and making new contacts with European importers.

The ongoing electricity crisis poses additional challenges for Gaza’s farmers. Irrigation requires consistent power supply within specific timeframes. To compensate for the shortage of electricity, farmers use generators, which add to their costs. These conditions have encouraged farmers to use solar energy and explore the possibility of funding such projects through international donors. The shift to solar power again depends on Israel’s cooperation, which has hindered development of solar energy projects in Gaza and reduced their feasibility.

Al Khatib explained that the restrictions Israel imposes on the entry of herbicides and fertilizers also impact the quality of the strawberry crops. Israel only allows the entrance of low-concentration fertilizers into the Strip, as it considers other types to be “dual-use.” This type of fertilizer reduces the strawberries’ shelf life and decrease yield per dunam by about 25 percent. The heads of Gaza’s farming associations are still awaiting Israel’s response to a letter they sent, requesting permission to import fertilizers and herbicides to Gaza which are currently banned.

The lengthy time it takes to transport products out of Gaza, another facet of Israel’s policy at Kerem Shalom Crossing, also impacts the quality of the strawberries. Like all other goods cleared for exit from Gaza, strawberry deliveries can be held up at the crossing and kept in the sun for drawn-out periods of time. Negotiations for the building of a shaded area at the crossing, which have literally been going on for years, have reportedly just begun to bear fruit, pardon the pun, and the shaded area is apparently under construction.

Finally, given that trucks cannot cross from Gaza to the West Bank directly, Gaza suppliers depend on transport fees set by external companies which transport the goods from Kerem Shalom to their destinations. The cost of shipping a truck loaded with strawberries from Gaza through Kerem Shalom to Hebron or Tulkarem, including taxes and loading costs, is between 3,000 and 3,500 ILS (850-1000 US dollars).

Israel’s decision to allow the marketing of Gaza-grown produce in the West Bank was a step in the right direction. It had the potential of improving economic conditions in the Strip, but the permission alone is nowhere near enough. Expanding the kinds of produce approved for marketing in Israel, allowing freedom of movement for Gaza producers and suppliers, alleviating restrictions on essential farming equipment and materials, and optimizing the transportation of Gaza’s produce to its destination markets – are all just as indispensable to the growth of Gaza’s agricultural sector and development of its economy. Israel must establish a fair, transparent, and consistent policy in coordination with Gaza’s producers and suppliers, and allow them to plan and execute the marketing of produce outside of the Strip, including of Gaza’s highly-acclaimed strawberries.