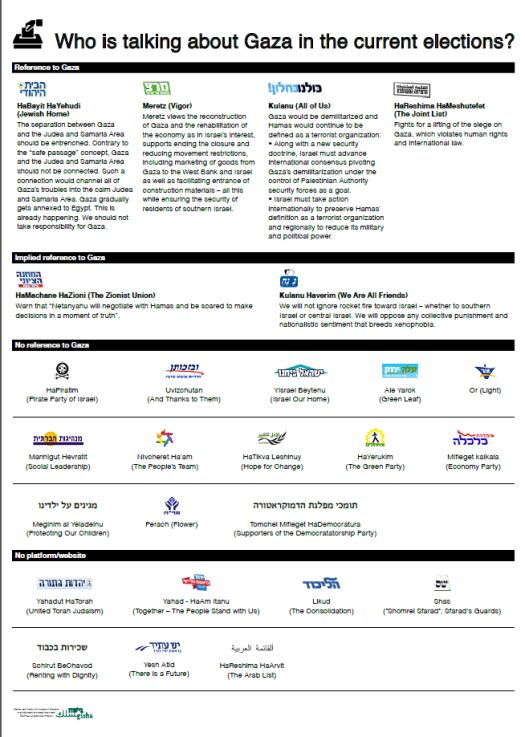 The long military operation that took place last summer resulted in unprecedented loss in human life and left behind it trauma and destruction on a massive scale, in Gaza and southern Israel but not just. According to Defense Minister Moshe Ya’alon, the operation cost Israel’s military nine billion NIS (about 2.3 billion USD) and civil damages in Israel are estimated to be somewhere between ten and twelve billion NIS (Hebrew) (2.5 – 3.1 billion USD). Reconstruction in Gaza would take years, even under optimal conditions, and we are very far from optimal conditions. Despite these facts and the recommendations of a number of experts about what actions must be taken in order to prevent the next escalation, the charged situation in the Gaza Strip has been almost completely absent from the discourse around Israel’s upcoming elections.

Hardly any of the parties that are expected to make it into the next Knesset (parliament) are talking about Gaza. The word “Gaza” appears only in the Meretz (Hebrew) and Bayit Yehudi/Jewish Home (Hebrew) party platforms. Meretz’s platform appears to be identical to its platform from the previous election, and the same holds true for Bayit Yehudi, which is still talking about the “program for calm”, proffered in 2013, stating, among other things, that “Gaza will gradually be annexed to Egypt”.

The foreign policy platforms of the other parties (Yisrael Beytenu, Kulanu (Hebrew), the Zionist Union (Hebrew, English) the Joint Arab List (Hebrew)), do not mention Gaza at all, while some parties have yet to publish a platform (Yesh Atid, Likud). Other parties do not have a website (United Torah Judaism), and others only have Facebook pages (Shas (Hebrew), Yahad – HaAm Itanu (Hebrew)).

In recent months, both Hamas leaders (Hebrew) and Israeli military commentators were heard warning that the fighting may resume if Gaza’s reconstruction continues to be delayed. In the meantime, there have been isolated shooting incidents along Gaza’s border and residents in Israel’s south report of dozens of experimental rocket launchings toward the sea. Security officials in Israel, from the chief-of-staff to top intelligence officers (Hebrew) claim that allowing Gaza’s reconstruction and economic development is in Israel’s interest from a security standpoint, but that not enough has been done.  But again, the self-proclaimed candidates poised to take over Israel’s leadership, along with their would-be opposition critics, have not taken the trouble to tell the public how they mean to improve the situation or what measures, perhaps even solutions, they have on offer for preventing millions from once again seeking shelter from rockets  in the near future.

The parties may ignore Gaza, but Gaza is still there. Tens of thousands of people are living there without a roof over their heads, huddled in schools and shelters, without jobs, without hope, without prospects. Construction materials to enable rebuilding are held up and employment opportunities are few. Businesspeople, students and entrepreneurs cannot travel and the sale of Gaza goods outside the Strip is still limited. A few months ago, former Intelligence Minister Dan Meridor spoke about a discussion held among members of the previous government. Meridor asked his colleagues: “Why is there a siege”? After a short discussion, then-Minister of Defense Ehud Barak replied with one word: “Inertia”. Since then, governments have changed, two military operations have come and gone, and only inertia remains, promising more of the same.

Israel can allow Gaza goods to be sold in the West Bank and in Israel on a massive scale without foregoing the caution security needs require. Subject to individual security checks, Israel should allow people who want to acquire or supplement their education, advance professionally, make business connections, buy and sell goods, and visit family to travel. A commitment to allowing normal civilian life compels Israel to allow the thousands of Palestinians who are stuck in the Gaza Strip, unable to travel to the countries where they live, study and work, to get to their destinations via the Allenby Bridge border crossing. And especially important now, Israel can allow the purchase of the massive amounts of construction materials that are required for rebuilding life in Gaza. As outgoing Chief-of-Staff Benny Gantz said: “The balance must tilt toward hope”.

Update 2.3.15: It came to our attention that the platform of The Joint List in Hebrew is an abbreviated version of the Arabic text, in which Gaza is indeed mentioned. We’ve amended the table to reflect that.