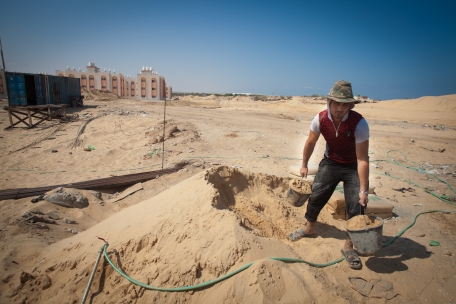 Only 4.2% of Gaza’s residents are employed in the construction sector. Photo: Eman Mohammed

In addition, though the Gaza Reconstruction Mechanism, which was set up to coordinate the entry of construction materials into Gaza for the private sector, has been active for a year, only 4.2% of Gaza’s residents are employed in the construction sector (11,395 workers only, out of all people employed in the Gaza Strip). This is compared to 6.9% in the first quarter of 2013 (which, at the time, meant 32,064 of all people employed in the Strip). At that time, tunnels between Gaza and Egypt were used to bring in materials forbidden from entering via Israeli-controlled crossings and some materials were entering via Israel for internationally-funded projects.