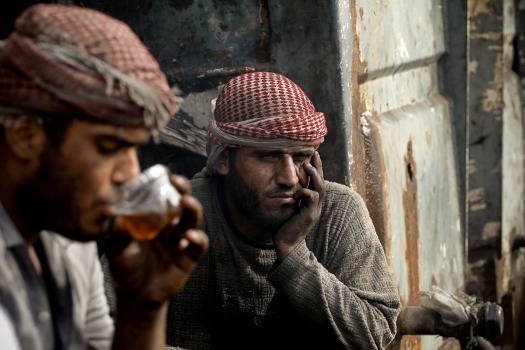 Wood is of course critical for the furniture sector. Photo: Eman Mohammed

The Israeli Ministry of Foreign Affairs sent around an update today about Tamer Barim, a resident of Gaza who was arrested on the allegation that he sold construction materials meant for reconstruction in the Strip to Hamas operatives.

According to the update, Barim was arrested at the end of August. Despite this and his alleged actions, the security establishment didn’t stop construction materials from entering Gaza and rightfully so. During the month of September 250,440 tons of materials entered the Strip and in October 327,400 more. As evidenced in the comments of various officials, there appears to be recognition that reconstruction in Gaza is in Israel’s interest. Stopping materials from entering, even if some might get into the wrong hands, isn’t an option. It should go without saying that more than it just being in Israel’s interest to facilitate reconstruction and industry, it’s also the right of Gaza’s residents to earn their livelihoods and live in dignity.

Despite all this, Israel still restricts entrance of construction materials, but it all but bans entrance of wood. Officially, it doesn’t allow in wood planks more than a centimeter thick, on the grounds that these can be used to reinforce tunnels. Wood is of course critical for the furniture sector; without it, manufacturers warn, the sector is on the verge of collapse. Yet it’s also needed for reconstruction. Last week, at a conference entitled “Promoting a Coordinated Strategy for the Reconstruction of Gaza” held at the Netanya Academic College, United Nations Deputy Special Coordinator for Humanitarian Affairs Robert Piper noted whimsically that in all his professional career dealing with reconstruction following disasters and conflicts around the world, he’d never had to contend without wood and he hoped that he would never have to again.

This week, we sent a letter to the Coordinator of Government Activities in the Territories calling on him to reverse the restrictions on wood and other items critical for the furniture and construction industry. We also reviewed the security arguments behind the choice to limit wood.