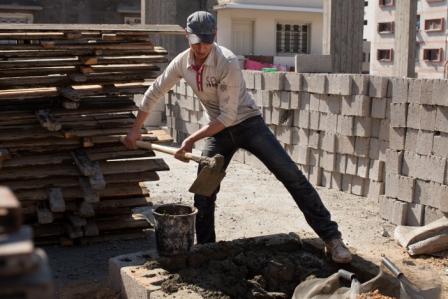 There are less opportunities, especially for young people. Photo by Gisha

November 15, 2017. Unemployment in Gaza continues to rise and reached 46.6% in the third quarter of 2017, the highest it has been since Operation Protective Edge in 2014. This unemployment rate reflects what we know to be true in Gaza: there are less opportunities, especially for young people, and less hope for building better future for Gaza and for the region as a whole.

Unemployment rose from 41% in the first quarter of 2017, to 44% in the second quarter of the year and has now risen to this new height. Unemployment is even higher among women and stands, like it did in the previous quarter, at 71%. Until 2016, women’s participation in the workforce had been steadily increasing. However, due to lack of work opportunities, the rate of participation of women in the workforce in the third quarter of 2017 was 21.9, compared to 70.8 for men. The increase in the unemployment rate is also caused by an influx of people searching for work, while fewer are successfully finding employment.

It is extremely alarming that the only other time since the closure began that unemployment was this high was the third quarter of 2014 (47.4%), which included the 50 days of Operation Protective Edge and the death and destruction that it caused.  Political decisions have led to a significant deterioration in living conditions in Gaza. Removing the severe movement restrictions that are placed on residents of the Gaza Strip will help ensure the realization of their right to livelihood, a right we all share.