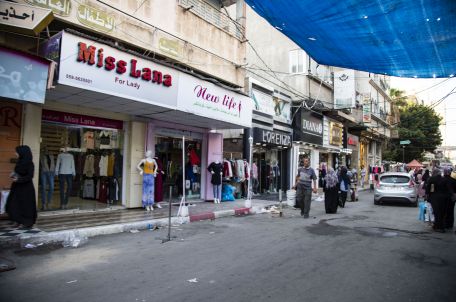 A street in Gaza. Photo by Asmaa El Khaldi.

In Gaza, 53.1% of all employees work in the service and public sectors. There is a shortage of private sector manufacturing and sales jobs, which depend on the ability of business owners to transport goods and travel to and from Gaza in order to network and develop their businesses. Travel restrictions imposed by Israel block this type of development. Self-employed individuals account for 15.9% of Gaza’s workforce.

Well-being in Gaza depends on job creation. Israel must facilitate access to livelihoods, including lifting the ban on laborers entering for work in Israel; allowing movement of goods into and out of the Strip, including small-scale import and export activity; significantly increasing the fishing zone and allowing safe access to sea and land areas; and removing arbitrary restrictions on travel for professional development and opportunities.