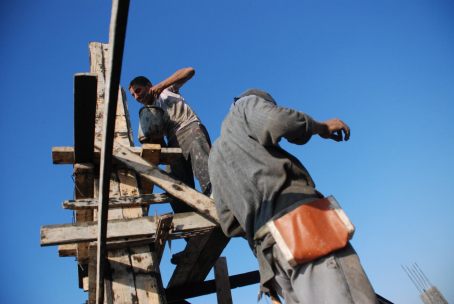 November 26, 2014. After the cease fire agreement between Israel and Hamas went into effect on August 26, 2014, Israeli officials declared that Israel would join the Gaza reconstruction effort. Chief of Staff, Lieut. Gen. Benny Gantz said (Hebrew) that “the calm also depends on the continued trend toward fostering economic hope there [in Gaza]”. Defense Minister Moshe Yaalon said (Hebrew): “We need to release the pressure and allow Gazans, not Hamas, to live in dignity”. Three months after the operation ended and with the first winter storms hitting Gaza, it seems that, despite the good intentions, Gaza’s reconstruction is still painfully slow.

The mechanism for overseeing the entrance of construction materials into Gaza is not entirely clear yet, but sources on the ground describe a complicated process which is interfering with Gaza’s reconstruction. In the meantime, about 30,000 people are still living in UNRWA schools and tens of thousands more are forced to live in crowded conditions with relatives or in temporary dwellings.

In early November Israel permitted Gaza goods to be sold in the West Bank for the first time since the closure was imposed. So far, 31 trucks loaded with goods have left Gaza for the West Bank (as opposed to only ten in the same month last year, and those were carrying goods to be sold abroad). At the moment, the shipping of goods is not without problems, and there is still a long way to go to ensure that the venture is profitable for everyone involved. Conditions for profitable business planning must be established, the Israeli market must be opened, and free travel must be allowed in order to facilitate business connections, market building and professional training. According to Israel’s security establishment and the supportive statements made on the international scene, the sale of Gaza goods is designed to help the Palestinian economy recuperate.