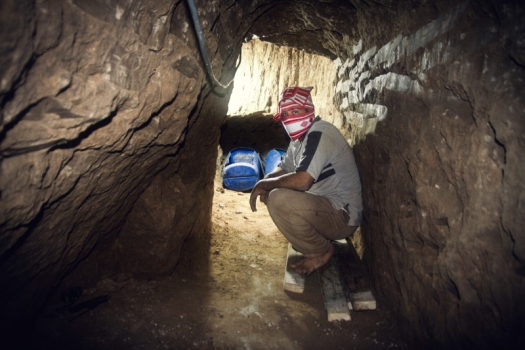 Amos Harel called Israel’s policy on the tunnels in Gaza a “national strategic failure” in an article in Haaretz. Amir Oren wrote that even the state comptroller won’t manage to make sense of the policy. A story in Yedioth Aharonot’s magazine, 24-Hours, described a mechanism used for exposing tunnels on the Israeli border. The story quotes Dr. Yossi Langotsky, a geologist and former senior intelligence official: “For years, I’ve been yelling. I have sent dozens of letters to the defense minister. They thought I was a nuisance”, he says. “The technology is there and it can be used. The problem is that, until two years ago, the army didn’t want to hear about the tunnels. Now they’re waking up”. Globes also reports (Hebrew) about possible technological solutions for detecting tunnels that have been suggested to Israel’s Ministry of Defense over the past few years, as does TheMarker (Hebrew).

And yet, the solution that the defense ministry offered up to meet the challenge posed by the tunnels was severely restricting the entrance of construction materials to Gaza. This solution, we now know, has not been all that effective, and it turns out that decision-makers may have been ignoring other options that were put on the table.

Why haven’t restrictions on the entrance of construction materials stopped the tunnels?

We don’t know whether the tunnels recently found in Gaza were built with construction materials brought in through Rafah, nor do we know if the technologies on offer for discerning tunnels are effective. What we do know is that over the years, Israel has restricted the entrance of construction materials to Gaza, and that, despite mounting evidence that the restrictions didn’t achieved their goal of stopping the tunnels, yet did have a tremendous impact on Gaza’s economy and its people, Israel’s Ministry of Defense has chosen to ignore alternative solutions. There has also not been any meaningful public debate holding the ministry to account on this issue until now.

The defense ministry has not said how long restrictions on the entrance of construction materials to Gaza will last or under what conditions they will be removed. They have also not said how the extensive damage the restrictions have caused to Gaza’s economy is consistent with statements about the need to allow economic development in Gaza as a condition for a long-term security. In addition, the current round of hostilities has already caused immense damage to civilian infrastructure and to hundreds of homes. Reconstruction on a massive scale will be a humanitarian imperative, for which Gaza will need, of course, construction materials. Seven years of closure have not achieved quiet. Gaza’s economy cannot continue to be strangled under the pretense of security, not just because doing so raises serious legal and moral questions, but also because of the poverty, destruction and despair that ensue.

Restrictions on the entry of construction materials to Gaza are a bad and simplistic response to a complex problem. They violate human rights and their effects have proven dubious. It is possible that the solutions we have mentioned are not effective enough, or perhaps they are incredibly efficient. Without a more honest and open public debate, we will never know, and there has never been a more urgent time than the present.