On July 30, during Operation Protective Edge, Israeli artillery fire struck the Al-Awda factory, owned by businessman Mohammed Tilbani, sending it up in flames. Continuous strikes made it impossible to reach the burning building and even if it had been possible, severe shortages of water would have rendered it difficult to extinguish the fire. The flames reached the factory’s fuel reserves which contained thousands of liters of fuel stored for the factory’s generators. All factories in Gaza rely on generators because of frequent and lengthy power outages in the Strip. The blaze continued the next day, consuming everything on the factory’s three floors, each spanning 5,000 square meters. Nothing remained of the factory’s merchandise or raw materials, which were to supply work for the factory’s production line for six months to come.

The Al-Awda factory, located in Deir al Balah in the central Gaza Strip, has been manufacturing sweets since 1977. Over the years, the factory expanded, at one point employing 400 workers in three shifts, 24 hours a day. In the past, 60% of the factory’s products were sold in the West Bank, 5% in Israel and 35% on the local market in Gaza. Since the closure was tightened in June 2007, Israel has prohibited the sale of Gaza-made goods in Israel and the West Bank. With its main markets cut off, the factory opened on just ten days per month and operated one production line, out of the five that were used in the past. Tilbani preferred scaling back operations over laying off workers.

Back in 2011, Mohammed Tilbani said that Gaza industrialists lived between a rock and a hard place: “The market for my products in the West Bank is blocked off, and the local market keeps shrinking because of severe unemployment in Gaza and fewer consumers who will buy the products I make. A factory that can’t export its merchandise will have a hard time surviving”. In 2012, the United Nations’ World Food Programme ordered 140 tons of date bars from the Al-Awda factory to be distributed to children in schools in the West Bank. Israel made an exception and allowed the trucks carrying the merchandise to travel from Gaza to the West Bank. Despite the successful precedent, the shipment remained little more than a singular gesture and a faint echo of what once was and could still be. 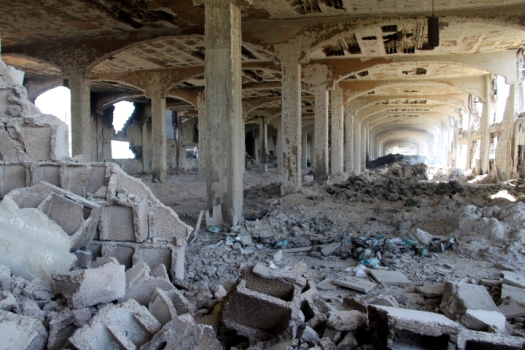 The ruins of Tilbani’s sweets factory

But Tilbani found creative ways to reinvent himself. Earlier this year, we posted the story of how he sent a ton of biscuits to Milan, Italy, to learn how to operate a new packaging machine he’d bought. He knew that the odds of getting an Italian engineer into Gaza who could train him to use the machine were slim, so instead he sent the biscuits to the engineer. Tilbani’s business survived throughout the years and he also maintained a working relationship with the Israeli District Coordination Office, charged with handling permit requests to travel via Erez Crossing.

Responding to the hypothetical argument that his factory was a legitimate target because it was a source of hostile fire, Tilbani told the Washington Post: “I never allow anyone near us. Not within a kilometer. My life is the factory. I live inside. I go to sleep at night listening to my production lines…There is no one like me in Gaza…You say there were rockets fired from my cookie factory?”, the Post describes him saying, shaking with anger, “Prove it”.

During the hostilities that took place this summer, 206 factories and workshops were completely destroyed, including the Al-Badr preserves factory, which also provides a source of income for hundreds of farmers, Al-Wadiyah food processing factory, as well as the only factories that produce pharmaceuticals and cardboard, respectively, in Gaza. In addition to these, 332 factories and workshops were damaged. Rebuilding them, and Tilbani’s life work, will require a massive in-flow of construction materials. Israel has completely banned entrance of construction materials for the private sector since October 13, 2013.

Tilbani, a beacon of social responsibility and ingenuity, is an excellent example of the three things Gaza’s residents and its economy need right now: access to primary markets in the West Bank and Israel; free flow of people to access opportunities for business and for personal and professional development (as well as to normal family life and education); and a substantial amount of construction materials that would allow Gaza to rebuild. If one looks closely and works hard enough to make it happen, it’s easy to find in the ruins left by this and previous military operations the foundation for better days.