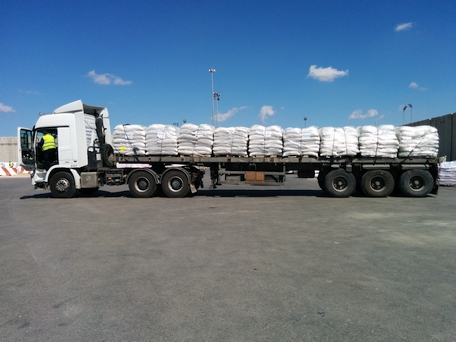 A truck at Kerem Shalom crossing. Photo by Gisha

June 23, 2016. Yesterday morning, the state was due to submit its response to the petition filed by the Council of Transporters and Carriers against the implementation of the Ministry of Transportation plan to limit use of Road 232 – the only access route to Gaza’s only commercial crossing. However, just one day before the deadline set by the court and after it had already granted the state’s request to delay submission of the response (and hearing dates), the state asked for thirty more days.

After years of complaints from local residents regarding the dangers posed by heavy traffic on the road, ministry announced a plan to ban most truck traffic on the road during rush hour in the morning and in the afternoon. In its petition to revoke the decision, the Council of Transporters and Carriers argued that implementation of the plan would create new hazards and would harm their livelihoods. Gisha asked to join proceedings as amicus curiae, to provide information about the toll the restrictions would take on Gaza residents.

Because of the dispute, then Minister of Defense, Moshe Ya’alon, said he had issued orders to build a new commercial crossing in the northern Gaza Strip, near Erez Crossing. Adding additional commercial crossings and other solutions are essential for residents on both sides of the fence.