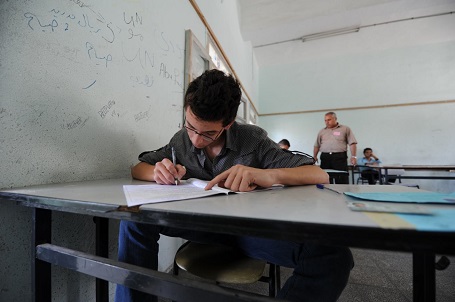 September 4, 2014. Palestinian sources informed Gisha of some changes to the policy on movement through Erez Crossing, between Israel and Gaza. The daily quota for businesspeople (mainly importers) allowed into Israel has risen from 120 to 200. Also, the minimum age requirement for a businessperson to be eligible to request a permit is now 30, instead of 35. The total number of businesspeople eligible for permits will rise from 1,200 to 2,000.

There will also be slight change in the criteria for who can apply for a travel permit to include businesspeople that have not yet transported goods via Kerem Shalom Crossing. Thirty permits per week will also be given to businessmen’s wives, who will be allowed to accompany their husbands, on condition that they are over the age of 40.

The maximum age of children allowed to accompany their parents on family visits will rise considerably from age six to 15. Humanitarian visits will now include grandparents. Until now permits were given only for visits, in humanitarian circumstances, to first degree relatives.

For the first time since July 3, truckloads of construction materials were allowed in through Kerem Shalom Crossing mainly for international organizations: two trucks of cement for UNDP entered Tuesday as well as 10 trucks loaded with cement for UNRWA, in addition to 13 truckloads of gravel for UNDP and the Palestinian Water Authority on Wednesday. Construction materials have not entered for the private sector since October 13, 2013. Kerem Shalom Crossing is operating normally for incoming goods and fuel.

Israel has announced that it will allow in tin sheeting needed for the construction sector. Israel has prohibited entrance of tin sheeting to Gaza for most of the time since the closure was imposed, in 2007. Israel also allowed in spare parts for some industrial machinery. These were allowed before, but under strict supervision and a lengthy approval procedure. We do not yet know if this was an exceptional move, or if the procedure itself will be changed or streamlined.

Raw materials for factories are again being allowed in, after being banned since mid-June. Goods that have been waiting at Ashdod Port will be allowed in now as well. An agreement for allowing in trucks, refrigerated trucks and buses was reached, after these vehicles had not been allowed in prior.

Rafah Crossing continues to operate according to the same format for the exit of casualties of the military operation, medical patients, and Palestinians holding foreign passports, residency status and visas. Students holding foreign visas are technically being allowed to cross though there are long delays and exit is not assured.

At this time, there is no need to coordinate exit in advance with the Gaza Interior Ministry; one simply arrives at Rafah, signs up and waits. In the past few days about 400 people have left the Strip daily through Rafah.

As of September 1, Egypt has allowed Palestinians holding foreign passports to return to Gaza. On Wednesday, the crossing was partially closed for what the Egyptians called “security reasons” and only 60 people managed to exit Gaza.

Due to the July-August hostilities, the school year in Gaza did not open on time. Instead of the planned date of August 26th, the school year will commence on Sunday, September 14th. One hundred seventy four government schools were damaged during the fighting, with 26 of them having been completely destroyed. One hundred twenty two other school buildings that were hit will be repaired on time for the school year. Twenty-six schools are still being used as shelters for internally displaced persons.

Before hostilities began, this summer, there was a shortage of around 150 government run schools, so the updated number is now 176.

The Palestinian electricity distribution company is trying to restore damaged infrastructure in different areas, but due to lack of materials and machinery, completing the task is impossible. The company says reconstruction of the Strip cannot be achieved without adequate electricity supply, and that factories manufacturing materials needed for building and repair will not be able to operate without sustainable infrastructure.

All ten high tension lines, transferring 120 megawatts of electricity purchased from Israel, are functioning, as are three high tension lines coming from Egypt, supplying 32 MW to the south of the Strip. The local power plant is still inoperational since its fuel reservoirs were bombed during the latest hostilities.

Some eastern parts of the Strip are still not receiving electricity supply at all, due to severe damage to infrastructure. Electricity is being supplied now in the remaining areas of Gaza for 4-6 hours followed by 12 hours of cuts.