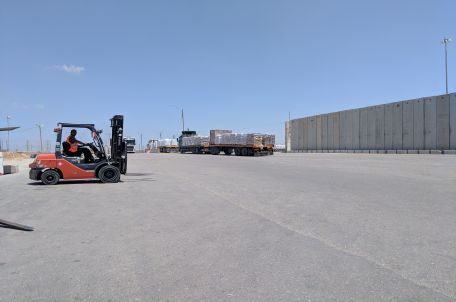 August 13, 2018. On Thursday, we petitioned the High Court along with the Association for Civil Rights in Israel, HaMoked – Center for the Defense of the Individual, Al Mezan Center for Human Rights, Adalah, and Physicians for Human Rights Israel, demanding that the court instruct the state to immediately reverse all restrictions imposed by Israel on the movement of goods through Kerem Shalom Crossing, the main lifeline for the two million people living in the Gaza Strip, about half of whom are children.

The new sanctions at Kerem Shalom, implemented on July 10, have led to shortages in basic commodities; they are inflicting immeasurable damage on industrial activity, businesses and factories, which are struggling as it is to engage in economic activity under the severe constraints of the closure tightened by Israel in 2007. Thousands of jobs have already been lost in the farming, textile, furniture, and construction sectors in Gaza, sending a ripple effect through other sectors, and greatly exacerbating the rate of unemployment, which had reached 53.7% even before the crossing’s operations were reduced in July. The petition was submitted along with affidavits by farmers and businesspeople, demonstrating the severe scope of the damage caused to Gaza’s economy.

In addition, for most of the past month, Israel implemented a dangerous decision to block the entry of cooking gas and fuel, which is essential for the running of critical civilian infrastructure such as hospitals, and the water and sanitation systems.

Israel openly states that its actions are punitive measures against Gaza’s civilian population, intended to mount pressure on Hamas in response to incendiary kites and balloons being launched from Gaza. Collective punishment of the civilian population for actions that are beyond its control is both immoral and illegal, further propelling Gaza toward a foreseeable humanitarian disaster.

The petition states: “Even before the closing of Kerem Shalom was announced, the crossing failed to supply the population’s minimal needs. And so, rather than take measures to prevent the demise of a population of two million people, the respondents are acting to further deteriorate the humanitarian and economic situation in the Gaza Strip (…) with complete disregard for the destructive implications of their decision for the civilian population.”