This week we are asking Israelis to devote two minutes of their day to a worthy cause. We know that many others are also asking for two minutes for a multitude of worthy causes, but trust us, these will be two minutes well spent. Each day we are asking people to send a letter to a different individual who can play a role in allowing sale of goods from Gaza in the West Bank. Why?

Let’s start at the beginning

With the exception of two shipments of date bar snacks, for the past five years there has been a complete ban on the sale of Gaza-made products in the West Bank and Israel. This ban has had a dramatic impact on Gaza’s economy, which, like any other economy, depends on commerce for its survival and development. Before the closure, about 85% of the goods shipped out of Gaza were sold in the West Bank and Israel. Now that this is no longer possible, commerce out of Gaza has all but ground to a halt and months can go by without a single truck leaving the Strip. These restrictions play a major role in the fact that the manufacturing sectors in Gaza are paralyzed, that the rate of unemployment is 31.5% and that 70% of the population receives humanitarian aid.

And here’s the thing: If Israel announces by the end of August that it will allow Gaza farmers to sell strawberries in the West Bank, they’ll be able to hire workers in time and plant enough strawberries in time for the upcoming season. A single, simple decision could add jobs and contribute to economic stability in Gaza as well as give other farmers hope that they’ll also be able to sell their produce in the West Bank and Israel in the future.

For the past two years, Israel’s government, including the prime minister himself, as well as top security officials have repeatedly talked about how important economic recovery in Gaza is for Israel’s security. The Ministry of Agriculture has said it does not object to the sale of strawberries from Gaza in the West Bank, and so has the Vegetable Growers Association. Frankly, given the widespread support, we don’t really understand who is blocking the removal of the ban. In a country which is known for its contribution to agricultural development worldwide, we are convinced that most Israelis wouldn’t want their government to prevent Palestinian farmers from earning their living in dignity.

Over the coming week, we will be asking Israelis to send a letter to a different person every day – from the Coordinator of Government Activities in the Territories to the minister of defense. Enough letters, enough public pressure, and we stand a real chance of advancing a policy change that would be good for everyone. 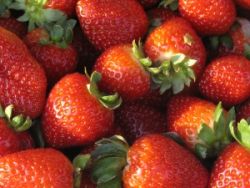 Gaza farmers have been exporting limited quantities of strawberries to Europe since 2006. Photo: Stock.xchg

Does the sale of Gaza strawberries in the West Bank pose a security risk? Are they grown under the proper sanitary conditions? Here are some brief answers:

“Certain actors inside Gaza might take advantage of the situation to smuggle weapons and ammunition from Gaza to the West Bank.”

Merchandise is already shipped from Gaza to the West Bank and to Israel in order to be sold in Europe and other destinations abroad. Israel runs thorough security checks on all these shipments at the Kerem Shalom Crossing (the only crossing currently operating for the transfer of goods). Recently a new scanner for screening goods was installed at the crossing.

Over the past two years, the security establishment has proven that when it receives an order to expand access for goods, it knows how to do so while at the same time ensuring security. The know-how is there and recently a new scanner was installed at the crossing which increased the capacity at the crossing for screening goods. We have not encountered any statements from military officials who have said that they are unable to prevent transfer of weapons or explosive materials if sale of goods outside of the Strip is allowed. They have said that the choice to prevent sale of goods from Gaza in Israel and the West Bank was made at the political echelon and needs to be decided upon there.

How will Hamas be impacted if goods from Gaza are permitted to be sold in the West Bank?

The situation that has been created since the imposition of the closure on Gaza in 2007 is one where the Hamas government earns millions of dollars per year in taxes on goods entering via tunnels on the Gaza-Egypt border. The government does not tax outgoing goods. The common analysis in Israel regarding the economic situation in Gaza over the past few years points to the paralysis of productive sectors in the Strip – mainly the agricultural and industrial sectors – which doesn’t exactly correspond with the political and security interests of Israel.

What about the quality of the fruit? What kind of water is used for watering the strawberries in Gaza and how can we know if it meets hygienic standards?

We aren’t experts on the subject, but Miriam Freund, head of Plant Protection and Inspection Services at the Israeli Ministry of Agriculture and Roi Kliger, managing director of the Vegetation and Animal Supervision Unit, gave their approval for the sale of Gaza strawberries in the West Bank. Ministry officials have told us that they support the sale of strawberries in the West Bank for the upcoming season as well. If this were not enough, it is worth mentioning that Gaza farmers have been exporting limited quantities of strawberries to Europe since 2006, as part of a project funded by the Dutch government. The European Union allows the produce into its territory based on phytosanitary (plant health) certificates issued by the government in Gaza.

If the quality is good, wouldn’t it be unwanted competition for Israeli produce?

According to Meir Yifrach, chairman of Israel’s Vegetable Growers Association (which also oversees strawberry commerce), not at all. The growers support the sale of Gaza strawberries in the West Bank at the beginning of the season, when strawberry prices are particularly high. Selling strawberries from Gaza would reduce prices and help consumers. Recently, when the price of tomatoes shot up, the association held a similar position, supporting the sale of tomatoes from Gaza in Israel in order to help consumers.

What does international law say on the topic?

Gisha’s position is that Israel has an obligation to allow normal civilian life in the Gaza Strip, including allowing the economy to function and allowing access to markets upon which the economy depends. For Gaza, these markets are currently in the West Bank and Israel. Alongside this, Israel may decide upon the route and means for entrance and exit of goods and on procedures for conducting security inspections.

So why aren’t Gaza strawberries allowed for sale in the West Bank? We don’t know the answer either. The one thing that is clear is that there is widespread support for the idea. It could be that what needs to happen is for the issue to rise higher on the agenda of decision-makers. It’s for this reason that we are encouraging Israeli citizens to make their voices heard on the topic.

Since 2007, strawberries are being cultivated on approximately 1000 acres (247 acres) of land per season