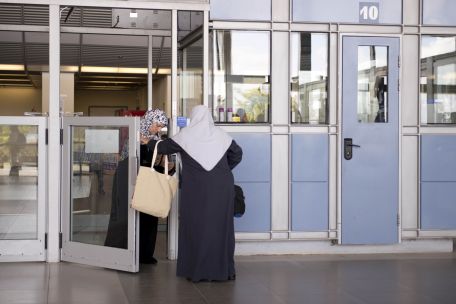 August 2, 2017. A new directive has been instituted on the few Palestinians allowed to exit Gaza through Erez Crossing: As of August 1, it is forbidden to exit the Strip carrying electronic devices other than cellular phones. Exiting with food, even food intended for personal consumption on the long hours of travel out of Gaza, has also been newly prohibited. The directive was sent to Gisha from the Gaza Coordination and Liaison Administration (CLA), the authority in charge of implementing the policy of the Coordinator of Government Activities in the Territories (COGAT) at Erez Crossing. Those exiting the Strip for “humanitarian reasons,” most of whom are medical patients and their companions, as well as people visiting family members imprisoned in Israel will be allowed to pass through with food “for personal consumption,” but not those transiting abroad via Jordan.

The restrictions on those traveling abroad, who are in any case obligated to do so on direct shuttles from Erez to Allenby Bridge Crossing, mean that people leaving the Strip for long periods, such as students, will no longer be allowed to carry electronic devices such as laptops or even electric shavers. The new restrictions also apply to Palestinian employees of international organizations, who also need to travel with laptops for their work. People exiting Gaza, from all categories, are now forbidden to pass through Erez carrying hard-sided luggage, and are barred from bringing with them toiletries of any type. Travelers who are not Palestinian are exempt from these restrictions, obligated only to declare any electronic devices included in their luggage.

The new directive was sent via e-mail, a day before it went into effect, to the intake coordinators at Gisha and at HaMoked: Center for the Defence of the Individual. It was not published in the “Status of Closure Authorizations,” where new directives are meant to be published. It is unclear how, why and through what process these restrictions were instituted, nor is it known who authorized them and to what end. The directive leaves no room for exceptions and no option of appeal.

As if it weren’t hard enough to get a permit, and as if the journey out of Gaza weren’t already a challenge, this new directive just makes life a little more difficult for Gaza residents and it’s hard to understand for what purpose. Security checks on luggage, toiletries, laptops and food are standard at airports, train stations, and other transit terminals around the world. Those checks are necessary and we all cope with the extra time it takes for the sake of keeping our fellow passengers and ourselves safe. The new directive reveals that Israeli authorities aren’t willing to conduct these basic checks on items that any traveler needs; that they don’t appreciate that students and businesspeople from Gaza also need to travel with laptops like anyone else in the world. It can happen because Israel doesn’t pay a price for inconveniencing Gaza residents, and just like that, from one day to the next, not even a sandwich can get through Erez Crossing.