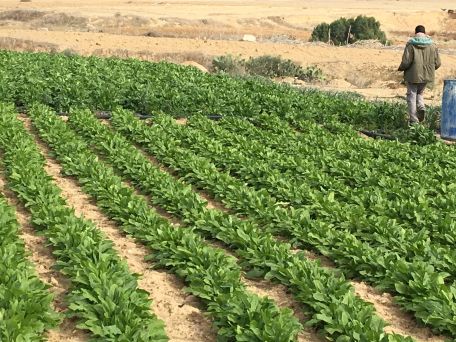 A-Najar’s fields at the Gaza strip, before the spraying. Photo by Gisha

January 23, 2017. Early on the morning of January 23, civilian planes hired by the Israeli air force, sprayed herbicides near the fence that separates the Strip from Israel, in proximity to Palestinian farmland in northern and central Gaza. The area is currently being inspected to determine the extent of the damage caused to crops.

Two planes sprayed close to plots owned by Saleh Mohammad a-Najar, a vegetable grower in the area between Khan Yunis and Deir al-Balah. The chemicals were carried by winds onto his fields and the extent of the damage is currently being assessed. A-Najar told Gisha that he had managed to harvest the spinach he had grown, but not his fava beans, peas or lentils. In a meeting with Gisha’s field coordinator two weeks ago, a-Najar spoke of sleepless nights he spent in fear that herbicide spraying would cause him to go bankrupt should the spraying damage his crops.

Israel’s Ministry of Defense hires private companies to spray from planes as part of “routine security activity”. In a response from September to a Freedom of Information petition (Hebrew) filed by Gisha regarding the harmful spraying practice, the ministry claimed that the spraying is done inside Israel’s territory, rather than in the Strip. Gaza farmers, on the other hand, have been reporting for years about crops that are damaged by the spraying.

Israel regularly sends heavy equipment, tanks and soldiers to raze and clear lands inside the Strip, as it sees fit. Using harmful and inaccurate means such as spraying from the air devastates farmers’ livelihoods and destroys the crops they grow with painstaking effort. The environmental or long and short-term health risks of exposure to the substances is unknown. What’s clear is that undermining Gaza’s economy contradicts the official policy of Israel, at least as stated, and, more than that, is entirely wrong and must be stopped.