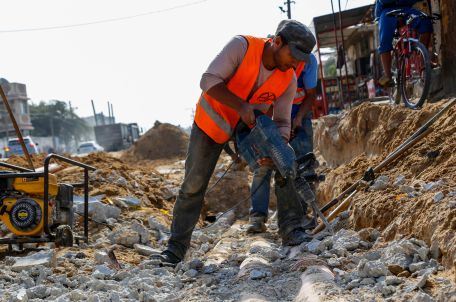 January 31, 2018. An extraordinary session of the Ad Hoc Liaison Committee (AHLC) was held today in Brussels, where Israel presented its proposed plan for the “humanitarian rehabilitation” of the Gaza Strip. Israel expects the international community to cover the costs of the plan’s implementation, an estimated 1 billion USD. Included in Israel’s strategy for saving Gaza from humanitarian disaster are several initiatives that should sound familiar, as they have appeared numerous times before as pledges of support made by Israel: A water desalination plant and sewage treatment facility, both of which have been stagnant for years at various stages of planning and execution; an increase in the supply of electricity sold to the Strip by Israel, which too, has been discussed for several years; talks of additional supply of water, also discussed, and building a waste site and developing an industrial zone in the north of the Strip.

Of the numerous things to take issue with Israel’s feigned and simplistic “rescue mission” for Gaza, there are two things to note in particular.

First: The arbitrariness of blanket restrictions imposed by Israel. For over a decade, Israel has maintained its failed policy of closure on Gaza, as part of which it takes it upon itself to approve, but mostly deny, the movement of every single person or container of goods into and out of the Strip. Extraordinary sessions and emergency meetings on the dire humanitarian conditions in Gaza might have been be spared had Israel allowed the many plans for Gaza’s reconstruction to be implemented , instead of obstructing them with delays, indiscriminate prohibitions, and impossible stipulations. First and foremost, what Israel must do if it intends to mitigate the catastrophic impact of its own restrictive access regime, is to recognize its own responsibility for the situation, given more than 50 years of control over Gaza. The alarming state of Gaza’s infrastructure, its chances for economic development, and the living conditions of its two million residents are largely dependent on Israel.

The second problematic aspect of Israel’s purported strategy is financial. When Israel’s Defense Ministry recognized that opening a commercial crossing in the north of Gaza was the order of the day, it sent Member of Knesset and Deputy Minister in the Prime Minister’s Office Michael Oren on a fundraising expedition through Europe. When funds didn’t materialize, the plans were effectively shelved, even when the potential contribution to Gaza’s economy would be significant. No less, the projects proposed by Israel for rescuing Gaza from devastation would benefit Israel, not only in contributing to regional stability but also because they would generate actual revenue for Israel and Israeli companies.

To name but a few examples, we estimate that the Defense Ministry earned about 92.5 million ILS (27 million USD) in ‘processing fees’ on trucks entering and exiting through Kerem Shalom Crossing in 2017. The provision of an additional 100 megawatts of electricity would bring in an additional estimated 32 million ILS per month to the Israel Electric Corporation (over 9 million USD). Israel is the main supplier for Gaza, its most captive market; in 2015 alone, the value of goods that entered Gaza from Israel stood at almost 2 billion ILS (over 556 million USD). In other words, beyond the moral and legal ramifications of Israel’s position as a duty-bearer towards Gaza residents, it also stands to profit from the advancement of these projects.

Hope for Gaza’s residents, and the prosperity of the region as a whole, are worth more than 1 billion dollars. True change in Gaza can only begin with recognition of Israel’s own responsibility toward the Strip and sincere intention for immediate action.