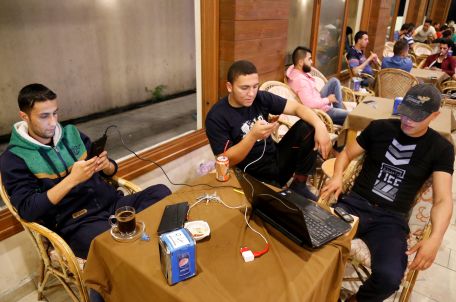 Gaza residents charging their phones and computers in a café, powered by generators. Photo from 2017, by Gisha.

December 30, 2018. It has been two months since Gaza’s sole power plant resumed operations of three of its turbines, leading to a significant increase in Gaza’s overall supply of electricity. For nearly two years, the power plant had only been able to operate one of its turbines, producing an average of 25 megawatts (MW). The power plant’s output increased to 80 MW in November as a result of a 60 million USD donation by the Qatari government for fuel. The Strip now has a total of 200 MW available to its residents, including the electricity sold and provided by Israel. As of today, Gaza residents are receiving up to 11 hours of electricity per 24-hour period. The actual power supply is affected by demand, which fluctuates depending on weather conditions and other factors.

The upturn in power supply has improved water provision. The United Nations Office for the Coordination of Humanitarian Affairs (OCHA) recently reported that supply from water reservoirs to homes in the Strip, which depends on electricity supply to pump and distribute water, has increased by about 40 percent, from 140,000 to 200,000 cubic meters per day. Currently, about one quarter of all households in Gaza receive running water for eight hours per day; fifty-five percent receive water for eight hours per day every other day, and a fifth of all households only receive running water every third day.

The increased power supply has also enabled water desalination facilities in Gaza to expand operations, with a 20 percent increase in production in the 48 public desalination facilities across the Strip. However, for drinking water, 90 percent of Gaza residents rely on water purchased from privately-owned desalination companies. Drinking water costs three to ten times the price of water for household use, and constitutes a major financial burden for most households.

The increase in power supply also has an impact on economic activity. Mujahied Al Susi, a furniture factory owner and trader from the Strip, says he has extended production hours in his factory, as he is no longer limited to a schedule of only three to four hours of electricity per day.

As Gisha has cautioned previously, the Qatari funding agreement is expected to last long enough to operate three of the plant’s turbines for a total of six months, at best Two months have already gone by and even with the funding, Gaza’s needs are far from being met. A sustainable solution to Gaza’s energy crisis must be found in order to enable living conditions in Gaza fit for the 21st century.

As an immediate step, Israel must enable the entry of all materials and equipment required to maintain and develop civilian infrastructure into Gaza. Moreover, existing plans that have already been agreed upon by relevant parties must be advanced, such as adding supply lines from Israel (the project known as “line 161”) and constructing a gas supply pipe to the power plant in Gaza. Israel is also obligated to enable robust economic activity in the Strip, which depends, among other things, on movement of business people and traders in and out of Gaza, and would alleviate the reliance of Gaza’s residents on humanitarian aid.