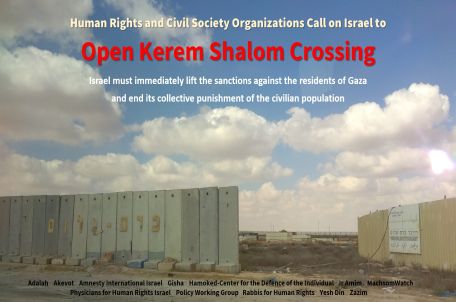 Yesterday evening, Israel’s Minister of Defense Avigdor Lieberman declared that Israel would completely halt the supply of fuel and cooking gas to Gaza and would reduce Gaza’s fishing zone to only three nautical miles offshore. This is a dangerous step that further intensifies the measures imposed by Israel at Kerem Shalom last week. Israel is now restricting the entrance of goods into Gaza to the bare humanitarian minimum, and has placed a sweeping prohibition on the exit of goods from the Strip.

Israel has framed these measures as a response to the incendiary kites being sent into Israel from Gaza, which have caused extensive damage to fields and farmland in the south of Israel. The damage to farmland and vegetation is severe, but the response cannot be to deliberately harm innocent civilians. Closing Gaza’s major crossing for movement of goods, the main lifeline for almost two million people, half of whom are children, constitutes an illegal and immoral act of collective punishment.

The dire situation in Gaza is well known to all – unbearable living conditions, a severe economic crisis, and astronomic unemployment rates – yet Israel chose to impose this irresponsible measure, which could have disastrous ramifications for the region as a whole. Even before this further intensification of the restrictions, Gaza’s economic sectors had suffered major damage as a result of the restrictions on the entrance of basic materials. Gaza’s current supply of electricity only provides for four hours of power, followed by sixteen-hour outages, meaning that generators are already massively overburdened. The shortage of fuel will stop generators used to power homes, businesses, and other essential services.

We call on the Israeli government to immediately lift the sanctions against the residents of Gaza and end the collective punishment of the civilian population. By virtue of its substantive control over everyday life in the Strip, Israel is obligated to facilitate normal living conditions for Gaza’s residents.