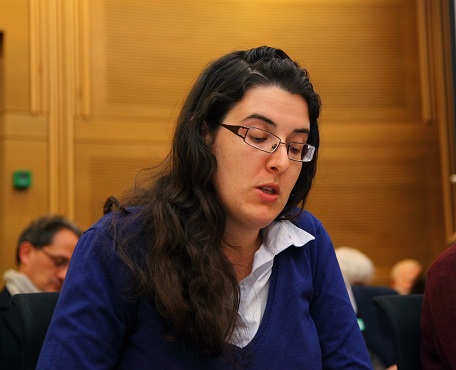 February 16, 2017. Gisha participated in a conference entitled “Not in a Democracy: 50 Years of Occupation” held at the Knesset, marking 50 years of occupation of the West Bank and Gaza Strip. Elizabeth Tsurkov, representing Gisha, spoke at the conference, reminding participants that “any discussion about an end to the occupation, a just solution or the resolution of the conflict, must include Gaza and the two million Palestinians living here. There is no solution without Gaza.”

Conference participants, including members of Knesset, representatives of NGOs, diplomats and public figures, heard from Tsurkov about the dire conditions in Gaza: ”Almost two million residents currently living with severe electricity shortages; 96% of the drinking water is dangerous; 90 million liters of untreated sewage flows into the Mediterranean Sea daily upwards of 40% unemployment; approximately 80% of the population require humanitarian aid. According to UN estimations, Gaza will become uninhabitable by 2020 due to growing density of population, erratic public services and severe shortages in basic necessities, such as clean water. None of this is the result of natural disaster. This is the product of policy.”

Tsurkov further noted that Israel has never ceded its control over Gaza, even after the military was pulled out and settlements removed in 2005. She recalled that the official purpose of the closure imposed on Gaza, marking a decade this year, was to overthrow the Hamas regime. This goal has not been achieved.

“The good news is that the Israeli public understands this is a failed policy. A survey we conducted among Israelis, soon to be released, indicates that a majority of 67% of the public believe the government’s policy has exacerbated the state of security. In other words, Israelis’ sense of personal safety has not improved over the last decade. Sixty-nine percent believe that improving living conditions in Gaza would serve Israel’s interests,” said Tsurkov.

Tsurkov added that: “Although the policy has – and continues – to fail, the government of Israel persistently enforces the closure and the preserves the policy of separation between the Gaza Strip and the West Bank. This policy is aimed at removing two million Palestinians from the equation in discussed annexation of the West Bank. The separation policy is another failure. These two million people are not going to disappear or get annexed to Egypt , as we’re being told. There are deep familial, cultural and economic ties between the West Bank and Gaza Strip which Israel hasn’t managed to sever.”