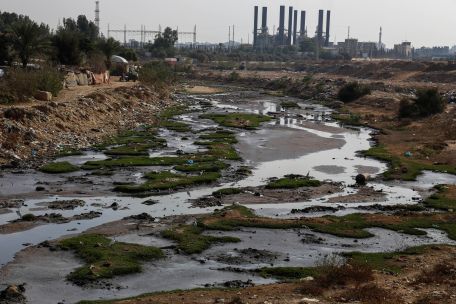 Sewage in Wadi Gaza, with Gaza’s sole power plant in the background

June 11, 2017. Gisha sent an urgent letter this morning to Minister of Defense Avigdor Lieberman, warning against an impending humanitarian crisis in Gaza should Israel decrease current electricity supply to the Strip. The letter was sent following an announcement made by the Coordinator of Government Activities in the Territories, Maj. Gen. Yoav Mordechai, threatening to reduce the supply of electricity sold and provided to the Strip by Israel.

“Reducing Israel’s electricity supply to Gaza is a red line that must not be crossed. This suggestion should be taken off the table entirely. Action must be taken to bring Gaza’s infrastructure to a level that meets the needs of its residents,” the letter asserts. The situation in Gaza is grave enough as it is, posing serious risks to residents of the Strip. Gaza’s sole power plant has been out of commission since mid-April due to a financial dispute between the Palestinian Authority and Hamas. Subsequently, 80 to 100 percent of the electricity available to residents of Gaza is what is currently being sold and supplied by Israel (the exact portion depends on fluctuating supply from Egypt).

At this point in time, entire hospital wings are shut down during blackouts, and are forced to reduce essential, life-saving treatments, where there is not enough power to provide them.   Water desalination stations cannot operate; 100 million liters of mostly untreated sewage are being pumped into the Mediterranean Sea daily; water for household use is only available intermittently; sewage cannot be pumped away from residential areas, and; generators, which are supposed to provide an alternative, are over-extended, on the brink of collapse. The collective responsibility of the Palestinian Authority, the de-facto Hamas government in Gaza, Egypt, and the international community for the dire state of Gaza’s infrastructure does not diminish Israel’s marked accountability for the situation, nor its inescapable role in fixing it.

Israel is not just a service provider, responding neutrally to a client’s request.  Given its extensive control over life in the Strip, Israel is responsible for enabling normal life for its residents. Israel is obligated to find solutions that will allow for the continued supply of electricity at existing capacity, and to take active steps toward increasing supply in order to allow residents, whose taxes are collected and held by Israel, access to acceptable living conditions.

As senior political and military figures in Israel have stated, particularly since 2014, improving living conditions in Gaza and supporting economic development are also square within Israel’s interests. In practice, Israel’s policy of restrictions on Gaza contradicts its self-professed interests, putting the region as a whole at risk of another unnecessary round of hostilities. In addition, it goes without saying that a further deterioration in the functioning of water and wastewater infrastructure in Gaza poses health and environmental risks for Gaza, as well as its neighbors.