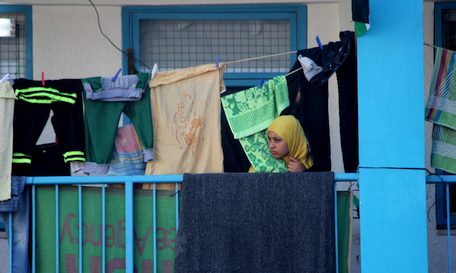 Hundreds of thousands of people are homeless. Photo by Gisha

March 4, 2015: Gisha executive director, Eitan Diamond, was interviewed (Hebrew) yesterday on Guy Zohar’s program on Israeli radio station 103FM, where he talked about Gaza’s reconstruction: “Six months after the fighting, not a single house destroyed during the last round of hostilities has been rebuilt. Hundreds of thousands of people are homeless and living in tents. Entire neighborhoods were destroyed. This, of course, doesn’t cover all the problems from which Gaza’s civilian population is suffering. The solution to these problems won’t come just from reconstructing the physical infrastructure– it requires the rehabilitation of Gaza’s economy, including measures that give Gaza residents, and ultimately us as well, some hope for the future.

Today Israeli news website Walla! published an op-ed (Hebrew) by Gisha spokesperson Shai Grunberg, about the pressing need to end the separation policy. “Gaza’s population needs an economic future. It will take greater efforts on the part of the international community, primarily Israel”, Grunberg wrote. “In order to jump start true economic recovery in Gaza, decisions have to be made in Jerusalem. Merchants and business people must be allowed to exit Gaza in order to revive business connections and make new ones, sign deals, reconnect with the markets, and rebuild factories. Young people must be allowed to get an education and reunite with family. The restrictions on the passage of goods must be lifted and shipping costs reduced. There is a need for the recognition of the huge and currently unfulfilled potential for Gaza to contribute to the region’s economies, including Israel’s, as well as to regional stability. This is, after all, exactly what Israel’s top security officials are saying”.