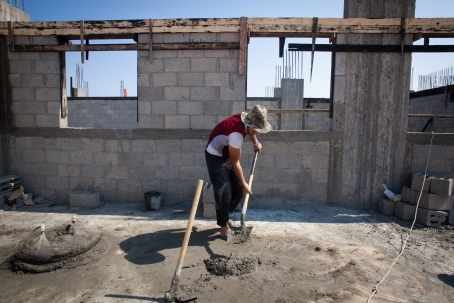 Only 3.8% of the workers are employed in the construction sector. Photo by Eman Mohammed.

Gaza’s service sector accounts for 55.7% of Gaza’s workers. The trade, restaurant and hotel sectors employ 20.7% of the workers. Though the mechanism for coordinating entrance of construction materials into Gaza has been active for more than a year, and despite the immense need for new housing, only 3.8% of Gaza’s employees work in the construction sector. In fact, this represents a drop compared to the previous quarter, in which the sector employed 4.2%. For a broader perspective – in the first quarter of 2013, when Gaza’s construction sector was at a relative peak, it employed 6.9% of local workers. Fishing and agriculture provide work for 5.2% of all workers.