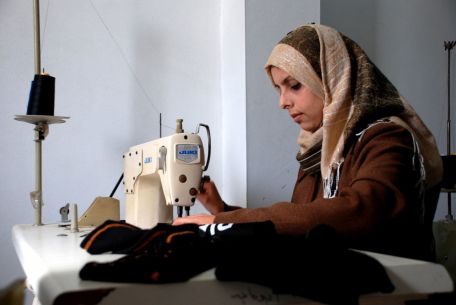 A seamstress in Gaza. The increase in women’s employment stopped and unemployment among women is about 64%. Photo by Karl Schembri

The rate of employment in farming and fishing increased significantly in the fourth quarter. About 6% of all employed people worked in these sectors in October-December 2016, compared to 4.5% in the third quarter of 2016. Many of the jobs in these sectors are seasonal and job availability fluctuates over the year, meaning this is not a sustainable increase in employment.

At the same time, the rate of employment in construction dropped from the peak of 7.2% in the third quarter to 6.7% in the fourth quarter. The number of people employed in the sector declined slightly, to 19,912. During the second quarter of 2013, the last quarter in which the smuggling tunnels from Egypt were fully operational, 8.7% of the workforce, more than 24,000 people, were employed in the construction sector. The figures indicate that the construction materials entering via Israel since 2014, as per the Operation Protective Edge understandings, are bringing a limited construction boom, and fall far short of bringing the anticipated growth and reconstruction.

Overall, the employment and unemployment figures for the final quarter of 2016 and the figures for the whole year continue to point to a stagnant economy. The noticeable improvements are small and far from meeting Gaza’s need for economic development. All parties involved understand that the Palestinian economy, particularly Gaza’s, requires much more freedom of movement and much better access to markets. There is no justification for the delay in implementing the necessary changes.